Lamotville Golden Arrows made it three wins in a row in the PSL when they defeated Stellenbosch FC 3-1 at Danie Craven Stadium in the Western Cape.

Abafana Bes’thende grabbed an early lead when Pule Mmodi beat Stellies goalkeeper Sage Stephens to make it 1-0 to Arrows following a minute by Sibusiso Mthethwa in the 15th minute.

The visitors continued to attack after taking the lead and Knox Mutizwa forced Stephens into a fine save, before Mmodi’s shot was cleared off the goal-line.

However, Abafana Bes’thende did double their lead five minutes into the second-half with Michael Gumede scoring following a quick counter-attack to make it 2-0 to Arrows.

Stellies managed to pull one back through Junior Mendieta two minutes after the hour-mark to make it 2-1 and the hosts then pushed for the equalizing goal.

However, Robyn Johannes committed a mistake at the back as his poor pass found Gumede, who then fired past Stephens to make it 3-1 to Arrows – completing his brace in the 77th minute.

The visitors then contained Stellenbosch in the closing stages of the encounter and ultimately, Arrows ran out 3-1 winners on the night.

The victory saw Arrows leapfrog Orlando Pirates on the league standings as they moved into third place, while Stellies remained 12th on the table.

Meanwhile, Tshakhuma Tsha Madzivhandila snapped their 10-match winless run in the PSL when they edged out Maritzburg United 1-0 at Harry Gwala Stadium in KwaZulu-Natal.

Maritzburg were the better side in the first-half with Tshakhuma goalkeeper Washington Arubi denying both Bandile Shandu and Thabiso Kutumela.

Bafana Bafana international Kutumela’s thunderous shot then beat Arubi, but the crossbar came to the visitors’ rescue and they cleared their lines.

The Team of Choice were left to rue their missed chances as Thabo Mnyamane netted from a free-kick to make it 1-0 to Tshakhuma on the stroke of half-time and it was his second goal in as many matches.

The hosts pushed for the equalizing goal after the restart, but they were frustrated by Vhadau Vha Damani’s defence which was reinforced by the introduction of Lehlohonolo Nonyane and Lebohang Mabotja.

Ultimately, Tshakuma emerged 1-0 winners and they moved up to 14th place on the standings, while Maritzburg slip down to the 15th spot.

'We had, of course, a little talk' - Klopp backs Alisson to bounce back for Liverpool after Manchester City mistakes

Fri Feb 12 , 2021
The goalkeeper endured a miserable Anfield evening last weekend but his manager believes he will return to form Jurgen Klopp has admitted that he and goalkeeper Alisson had “a little talk” following the Liverpool goalkeeper’s mistakes against Manchester City – but the manager has backed the Brazilian to find his […] 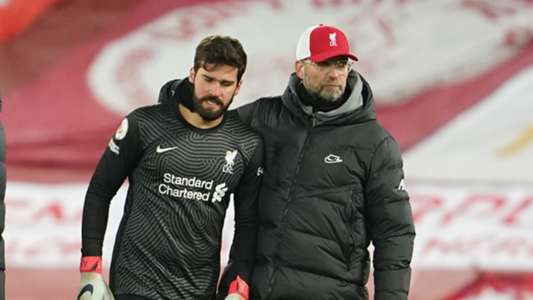