Arsenal, Chelsea and Liverpool are all in action as the top flight resumes with a bang this weekend

The Premier League has barely been away, but already excitement is at fever pitch ahead of the new campaign, with questions aplenty as the top flight kicks off this weekend.

Defending champions Liverpool will begin their title defence against newly promoted Leeds United on Saturday, while two of the championship hopefuls—Arsenal and Chelsea—will also give fans a chance to glimpse what’s in store for them this weekend.

The Gunners are the first to take to the field, when they begin their campaign away at Fulham—another new face to the Premier League—at 13:30 CAT on Saturday on SS Premier League, a new SuperSport channel dedicated to the top flight action.

Arsenal have every reason for optimism heading into the new campaign; following the muddled reign of Unai Emery, they won two trophies in a month under Mikel Arteta, having clinched both the FA Cup and the Community Shield.

Those victories—against Chelsea and Liverpool respectively—were evidence of what they could achieve against tough opponents in one-off fixtures, but can they do it consistently across a season?

Defensively, the arrivals of William Saliba and Gabriel bolster an area of concern, while Pierre-Emerick Aubameyang’s decision to remain at the club (for now at least) will guarantee a consistent goal threat.

The likes of Bukayo Saka and Eddie Nketiah have continued to improve under Arteta’s tutelage, while the Spaniard will be hoping for more from Nicolas Pepe following his underwhelming debut season in England.

There’s much more to come from the winger, who cost £72 million when he signed from LOSC Lille, but will Arteta be able to unlock that talent.

Arsenal’s first test comes in the form of Fulham, whose playoff victory over neighbours Brentford came just over a month ago.

Scott Parker has done well to galvanise the Cottagers since their drop into the second tier, and they’ll hope that a settled squad—which has retained Aleksandar Mitrovic, Tom Cairney, Anthony Knockaert and Ivan Cavaleiro—has learned their lessons from 2018-19.

Last term, they demonstrated an ability to absorb opposition pressure and hit teams on the counterattack, but can they trouble the Gunners’ backline on Saturday?

Also in action on the opening day, Liverpool host Leeds in a fascinating bout between the reigning Premier League champions and last year’s Championship winners.

The match will pit Jurgen Klopp against Marcelo Bielsa, and represents the sternest possible test for the newly promoted Yorkshiremen.

They will, however, have nothing to lose, and after returning to the top flight for the first time in 16 years, will be desperate to make a splash on their first match back.

Liverpool will be keen to rediscover the relentless winning mentality that appeared to have deserted them towards the latter end of last season, after the title had been wrapped up.

No one can fault a side who reached back-to-back Champions League finals and accrued 97 points and still finished as runners-up in 2018-19.

However, there are concerns that a thin squad may be found out if any of Klopp’s leading men sustain injuries.

This match will also be broadcast live on SS Premier League at 18:30 CAT on Saturday.

In Premier League action this weekend, SuperSport viewers can enjoy West Bromwich Albion’s first match back in the top flight when they take on Leicester City, Everton’s trip to Tottenham Hotspur, and Sheffield United’s meeting with Wolverhampton Wanderers.

The weekend’s action concludes on Monday, when new-look Chelsea travel away to Brighton & Hove Albion.

Frank Lampard has overseen an ambitious summer as the Blues look to close the gap to the top two, with a series of bright new recruits arriving at Stamford Bridge.

The likes of Hakim Ziyech, Timo Werner and Kai Havertz are all promising additions, but how long will it take for them to adapt to the rigours of the Premier League.

There are also concerns between the sticks, where Lampard is yet to truly solve his goalkeeping woes, and Brighton will hope to exploit the Londoners’ ongoing weak points when they welcome them to the Amex Stadium on Monday.

The match will also be live on SS Premier League, at 21:15 CAT on Monday.

As well as the new SS Premier League channel, La Liga also has its own new dedicated channel on SuperSport, with several matches set to be broadcast live as the league kicks off this weekend.

The action begins with Villarreal’s showdown with Huesca on Sunday, as the Yellow Submarine have an early opportunity to demonstrate their continental credentials.

Samuel Chukwueze could prove to be one to watch in the Spanish top flight this term, although having had a hand in only five goals last term, doubts remain about his ability to make an impact in the final third.

If he wants to be considered among the league’s top stars, it’s a weakness in his game that he must correct.

That match will be broadcast on SS LaLiga at 18:30 CAT on Sunday, ahead of Valencia and Levante who meet in the evening’s later kickoff at 21:15 CAT.

Fri Sep 11 , 2020
The Cameroon international has enjoyed great fortunes against the Parisians, and that run continued on Thursday evening at Stade Bollaert-Delelis Ignatius Ganago continued with his notable goalscoring run against Paris Saint-Germain, as Lens silenced the reigning Ligue 1 champions 1-0 at Stade Bollaert-Delelis. Thomas Tuchel faced the Blood and Gold […] 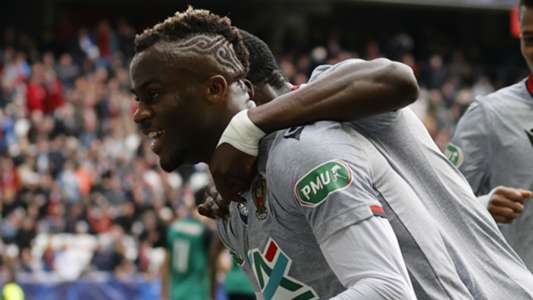