Mauricio Pochettino has called on his PSG side to give a better second-leg showing than they did at Barcelona last month.

PSG secured a huge 3-2 away win at Bayern Munich on Wednesday, as a Kylian Mbappe brace helped Pochettino’s side take a major step toward the Champions League semi-finals.

There is still work to be done at Parc des Princes on Tuesday though, and Pochettino wants his side to be ready to face another challenge against the Bavarians.

“I am happy with the result, with the attitude of the team which found itself in difficult situations against the best team in Europe,” Pochettino told RMC Sport. “We must congratulate the players for their sense of sacrifice. We are trying to repeat this kind of performance.

“When you win, it’s always easier to explain your decisions, everyone thinks you made the right choices. The credit goes to the players, they are the main protagonists, it is their quality that must be highlighted.

“There were a lot of sacrifices tonight, but we still have one game, 90 minutes to play. The first leg is favourable but the return will be difficult as we know.

“It’s a totally different result from the first leg against Barca, the advantage there is as small as possible. We hope that our performance in the return will be better than against Barcelona, that’s our desire.”

What happened against Barca?

Mbappe was inspirational in the last-16 first leg at Camp Nou, as his hat-trick led PSG to a 4-1 win over Barcelona.

PSG started the second leg on the back foot as Barca piled on the pressure, but the Catalans were unable to find an opener before Mbappe scored from the spot 30 minutes in.

Lionel Messi countered with a goal from distance but his missed penalty before the break virtually ended Barca’s chances, and the match ended in a 1-1 draw, with PSG advancing 5-2 on aggregate.

Will Marquinhos be ready for the second leg?

One of the major negatives for PSG on Wednesday was an injury to Marquinhos, who scored in the first half but then had to be removed shortly after. Pochettino admitted that the status of one of his key players is unclear moving forward.

“He felt pain in his adductor, we hope it’s not serious and that he will be available quickly,” Pochettino said of the Brazilian.

Wed Apr 7 , 2021
Christian Pulisic was praised by his manager after coming on in the Champions League clash, but those who went off didn’t fare quite so well Thomas Tuchel was largely happy following Chelsea’s 2-0 Champions League quarter-final first leg win over Porto, but he did admit that both Timo Werner and […] 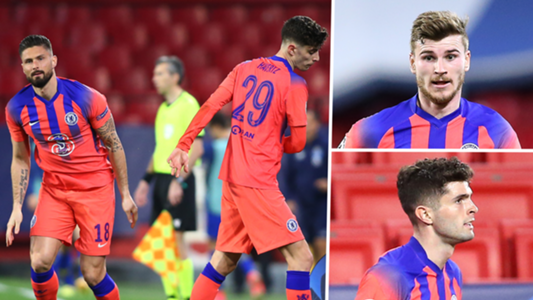