The Federal Government of Nigeria has backed the President of Nigeria Football Federation, Amaju Pinnick, for the Fifa Council Seat.

The election is slated for the 43rd Ordinary General Assembly of the Confederation of African Football, in Rabat, Morocco on March 12.

Other Nigerians to reach this level were Etubom Oyo Orok Oyo and Amos Adamu.

Permanent Secretary in the Federal Ministry of Youth and Sports, Nebolisa Anako, on behalf of the Minister, Sunday Dare, has expressed the support of the federal government to Pinnick’s ambition.

“Mr Amaju’s ambition would further reposition Nigeria in the global football map where we have made remarkable inroads,” Anako told the NFF website.

“If the NFF President wins the position, it would not be a victory for the Federal Government and all Nigerians alone, but the African continent.

“He would be a great ambassador of our great country if elected into the Fifa Council. As a member of the Caf Executive, Pinnick is aware of the task ahead and the Federal Government’s support to the actualization of his dream

“On behalf of the President of the Federal Republic of Nigeria, Muhammadu Buhari GCFR, and all Nigerians, we hereby pledge our unflinching support to Mr Pinnick because his victory would be our collective victory.

“[Sports Minister] Mr Dare believes Amaju can use his position and connections in Caf and Fifa to help promote and develop Nigeria and African football in all ramifications.

“Let us be resolute and firm in our support…This is no time to stand on the fence, but to be partakers in the scheme of things.”

“As a Fifa Council Member, Mr Pinnick will also be automatically a Member of the Caf Executive, which gives Nigeria a voice at both global and continental levels,” Dikko said.

“This is not a Pinnick project, but a Nigeria project. If countries like Guinea and Madagascar can have people in the Fifa Council, there is no reason why a big football-playing nation like Nigeria should not.”

Thu Mar 4 , 2021
Liverpool halted a run of four-straight Premier League defeats last time out by beating Sheffield United 2-0 at Bramall Lane. A strike from Curtis Jones along with an own goal from Kean Bryan were enough to stop the rot for Jurgen Klopp’s men. The Merseysiders now have the chance to […] 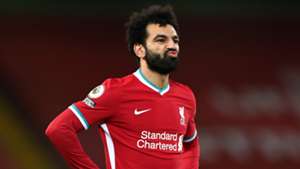