Pep Guardiola has told Phil Foden to be himself and not attempt to replicate what Kevin De Bruyne does for Manchester City.

City were dealt a blow this week when it was confirmed that De Bruyne is facing between four and six weeks on the sidelines on account of a hamstring injury.

Should De Bruyne be out of action for the full six weeks, he would miss games against West Brom, Sheffield United, Burnley, Liverpool, Tottenham, Arsenal, Borussia Monchengladbach and West Ham – with a potential return date being the Manchester derby on March 6.

De Bruyne is arguably irreplaceable in the City side, but Guardiola has a host of creative talents such as Bernardo Silva and Ilkay Gundogan to call on.

Foden brings creativity to the side, but he is also a dynamic figure and Guardiola wants the youngster to continue playing as he is at the moment as opposed to becoming a replacement for De Bruyne.

The City squad will be required to chip in and fill in for De Bruyne, and it’s likely that Gundogan, Riyad Mahrez and Joao Cancelo will have roles to play.

“The two young players who came off did really well,” Guardiola said. “But the quality of Gundo and Joao in the final third is really important.

“Gundo is a player who can assist or has the sense to score a goal, and with Phil, Riyad and Joao they have the quality for the extra pass.”

City were made to work hard to beat Cheltenham 3-1 in the fourth round of the FA Cup, and Guardiola was happy with how his side faced up to the physical challenge of the League Two side.

“Every throw is more important than a corner or a free-kick and they have these moments, are taller, bigger and better than us in this aspect,” Guardiola said of a game that was temporarily halted by a fireworks display. “But we reacted well and in this competition, it is not the first time a Premier League team has suffered.

“It is about our response in 90 minutes. At 1-0, I didn’t have any regrets about the way we were playing or behaving and fortunately the talent from the cross from Joao, the exceptional finish from Gabriel and Phil – the goals were excellent.”

Sat Jan 23 , 2021
Jamshedpur enter the tie on the back of three consecutive defeats while Hyderabad haven’t lost a game in this calendar year… A win for Jamshedpur can help them up to four places to fifth on the table and two within Hyderabad at fourth place when the two teams meet in Sunday’s earlier […] 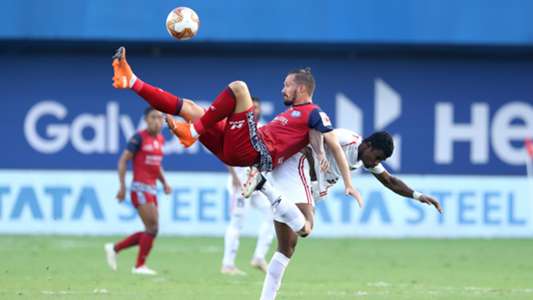