Austrian goalkeeper Christopher Knett was forced to miss Panetolikos’ clash with Panathinaikos, after burning his hand while cooking a steak.

The 30-year-old goalkeeper is Panetolikos’ first choice, but his name did not feature in the matchday squad for Monday’s game in the Greek Super League.

Broadcaster Nova caught up with the player who revealed his absence was due to an accident in the kitchen.

“I will stay out of this game and all will be okay for next week, all will be okay,” he said after showing the reporter his damaged hand, which in fairness did look blistered. “It happens.”

When asked if he was able to finish cooking his steak, Knett said: “My wife did the cooking.”

Panetolikos did not miss Knett on the night, as his understudy Nikolaos Melissas kept a clean sheet in a 1-0 win.

Other freak injuries in football

Knett can draw comfort from fellow goalkeeper Santiago Canizares who missed the 2002 World Cup with Spain after dropping a bottle of aftershave and cutting a tendon in his foot.

Steve Morrow was a journeyman for Arsenal, but scored the winning goal in the League Cup final of 1993. His celebrations were cut short as he was hoisted on the shoulders of a team-mate only to fall off and break an arm.

Ever Banega broke a bone in his ankle when failing to apply the break to his car when filling up at a petrol station, and it rolled back onto his foot.

Mon Feb 22 , 2021
The young starlet will undergo a mandatory quarantine ahead of her club’s Champions League clash with Brondby U.S. women’s national team midfielder Catarina Macario will miss the upcoming SheBelieves Cup finale as she has left the team to return to France. Macario has departed the squad to return to her […] 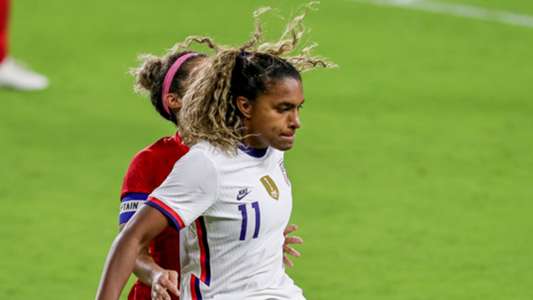