Napoli’s target of featuring in next season’s Champions League received a massive boost following Monday’s 2-0 away defeat of 10-man Torino.

First-half goals from Tiemoue Bakayoko and Victor Osimhen were enough for the Parthenopeans to secure all points at stake.

Both teams arrived at Stadio Olimpico Grande Torino chasing contrasting ambitions. While the visitors are pursuing their European dreams, Davide Nicola’s Maroons needed a win to help their battle against relegation.

The keenly contested encounter started on a fiery note after referee Paolo Valeri sounded his whistle, but it was Napoli who drew first blood through Bakayoko.

Left unmarked by the hosts’ defenders, the France international, who is on loan from Chelsea, unleashed a right-footed beauty past goalkeeper Salvatore Sirigu in the 11th minute.

Before the celebration died down, Osimhen doubled the advantage two minutes later in a spectacular fashion.

After winning the ball from Cameroonian defender Nicolas Nkoulou in Napoli’s half, the Nigeria international sped through Torino’s backline, beat Gleison Bremer before sending a low shot past Sirigu.

This is the first time since February 2017 – against Bologna – that the club has scored two goals in the opening 15 minutes of play in a Serie A away match.

2 – #Napoli have scored two goals in the opening 15 minutes of play of a Serie A away match for the first time since February 2017 (v Bologna). Sprint.@TorinoNapoli

Although that goal was a reality check for Nicola’s men, nevertheless, they were unable to match their well-organised opponents as they went into the half-time break with a two-goal deficit.

In the second half, both sides failed to find the back of the net after wasting several scoring opportunities.

Torino’s drive to pick at least a point against Gennaro Gattuso’s team suffered a huge setback as Rolando Mandragora was given his marching orders for a second caution in the 86th minute.

While Kalidou Koulibaly was on parade from start for the visiting side, Osimhen – who now boasts of seven Serie A goals in the 2020-21 campaign – was substituted for Andrea Petagna with 10 minutes left to play.

On the other side, Nkoulou who had a disappointing game, was taken off for Alessandro Buongiorno in the 57th minute.

Cote d’Ivoire’s Wilfried Singo was named in the starting XI but was subbed off for Federico Bonazzoli in the 72nd minute.

Thanks to this result, Napoli have climbed to third on the Serie A log having amassed 66 points from 33 matches.

Mon Apr 26 , 2021
The head of state met football officials in Accra on Monday and revealed some of his ambitions Ghana President Nana Addo Dankwa Akufo-Addo has charged the Black Stars to win next year’s Africa Cup of Nations tournament and as well qualify for the World Cup and go all the way to […] 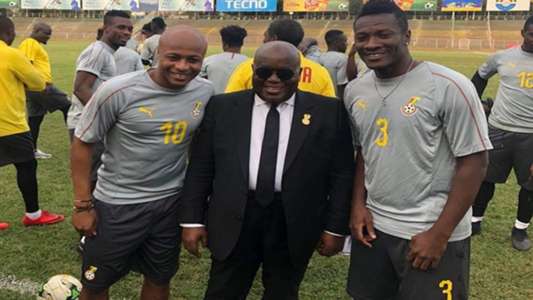