The Serie A title race may be decided, but several of the continent’s players are expected to play crucial roles in the top four tussle

Inter Milan may have motored to their first Serie A title in over a decade but what’s happening below this year’s Scudetto winners is arguably the most exciting race for the Champions League in Europe’s top five leagues.

Anyone from second to sixth — Atalanta, Juventus, AC Milan, Napoli and Lazio — could still play in next season’s Champions League with the final three slots undecided going into the final four games of the campaign.

La Dea, the Old Lady and Milan are locked on 69 points, the Azzurri are two points adrift in fifth spot and the Biancocelesti sit another three points back of Gennaro Gattuso’s men with a game in hand.

Juventus and the Rossoneri, two of the sides competing for a CL place, meet this weekend in Turin and nobody could have predicted both sides will be in this situation at the start of the season and certainly at the turn of the year.

Despite the appointment of an inexperienced Andrea Pirlo, the Old Lady, nine-time winners of the league on the trot were tipped to make the top four with ease even if there was a feeling Inter might win the Scudetto this year.

As for Stefano Pioli’s team, their upswing post-lockdown last year and continued overperformance into this term put them into the title picture at the midway point of the campaign.

Their decline from Serie A contenders to scrambling for a CL spot that looked assured at the turn of the year is down to, but not limited to the absences of Zlatan Ibrahimovic and Ismael Bennacer for the majority of the second half of the season.

The Algeria star and Franck Kessie’s partnership was arguably the finest in the Italian top flight and losing the North African to injury, coupled with the Ivorian’s inability to dovetail seamlessly with Sandro Tonali and Soualiho Meite harmed the Milan giants’ midfield.

Victor Osimhen has scored three goals in his last four matches. Is he back to his best? 🤔

Do you expect him to start against Inter Milan tonight?

The Rossoneri’s cause hasn’t been helped by a series of damaging defeats against the sides in and around them in 2021, with hurtful losses against Juventus (3-1), Atalanta (3-0), Inter (3-0), Napoli (1-0) and, recently, Lazio (3-0) further harming their prospects.

Given that head-to-head is the primary tie-breaker in Italy, Kessie and co. are at a disadvantage if they end level on points with any of the aforementioned teams.

Looking to pounce on any potential slip from Juventus or Milan this weekend are Napoli, marshalled by Kalidou Koulibaly at the back and finally able to rely upon Victor Osimhen up top.

Both players missed several games this season, evidenced by K2’s 25 league starts and the Nigerian’s paltry 12, largely due to an injury suffered in November, coronavirus in January and his struggles to convince Gattuso to trust him regularly to lead the line.

Even though the West Africans have thrived since the last international break, with Osimhen netting five times in his last seven appearances, there remains a tendency in Naples to drop points in mystifying circumstances.

Case in point was last week’s stalemate at home to Cagliari, a game where the hosts couldn’t add to the Super Eagle’s 13th-minute strike and eventually settled for a draw after a last-gasp Nahitan Nandez leveller for the away side.

They missed four scoring opportunities tagged ‘big chances’ and even last season’s summer signing was culpable. The inefficiency wasn’t an anomaly, however, as they’d equally squandered a host of opportunities against Torino — with Osimhen missing a staggering four despite scoring — but it wasn’t costly as they ran away comfortable 2-0 winners.

Napoli have the easiest run-in on paper: they play three sides currently in the bottom half before ending the season at home to 10th-placed Hellas Verona. Contrast this to Atalanta, who face AC Milan on the final day, while Juve play both Milan clubs and Sassuolo in three of their final four matches of the season.

With the teams definitely going to take points off one another and considering the Rossoneri’s poor record against the teams they’re slugging it out with, Gattuso’s men have an edge despite being fifth at the time of writing. Be that as it may, they can’t afford slip-ups like the one at home to Cagliari last time out.

It would be remiss to ignore Lazio in sixth, three points off the Azzurri with a game in hand. Simone Inzaghi’s team have won 11 games in succession at Stadio Olimpico and crucially don’t play any side ahead of them in their remaining games, although they have the huge Derby della Capitale clash with Roma on May 15.

From an African perspective, Kessie and Bennacer or Koulibaly and Osimhen may end the campaign on a high with Milan and Napoli respectively or could just as easily miss out on Champions League qualification.

The excitement and element of unpredictability mean nothing is likely to be settled until the final kick of the campaign, so fasten your seat belt as we enter the campaign’s denouement.

Fri May 7 , 2021
The Super Falcons player continued her fine form as her side returned to winning ways, seeing off their visitors Regina Otu was on target as Minsk recorded a 7-0 victory over ABFF U19 in Friday’s Belarusian Women’s Premier League encounter. Following her arrival from Rivers Angels in April, the Nigeria […] 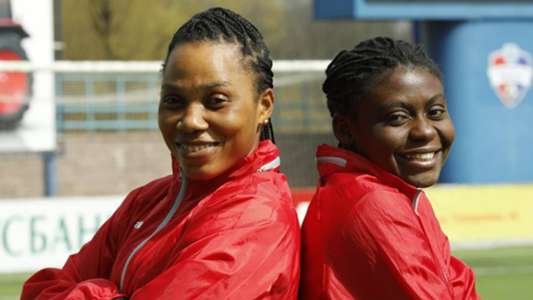