The Buccaneers joined top African clubs such as Enyimba FC, CS Sfaxien and Raja Casablanca in the Last 16

Linda Mntambo’s second-half goal inspired the Buccaneers to a well-deserved victory over Galaxy, who suffered a 4-0 aggregate defeat.

The Buccaneers were carrying a comprehensive 3-0 aggregate lead from the first-leg encounter at Botswana’s National Stadium last weekend.

Coach Josef Zinnbauer made nine changes to the starting line-up which faced Galaxy in Gaborone with Mntambo and Thulani Hlatshwayo being the two players who retained their places in the team.

On the other hand, Galaxy were hoping to cause an upset by overturning the 3-0 deficit against a much-fancied Pirates side and advance to the group stage.

Thabang Sesinyi, Gape Mohutsiwa and Yahi Sangare were the new faces in the Botswana champions’ starting line-up with coach Oris Radipotsane having made three changes.

Galaxy were the better side in the opening stages as they pressed Pirates and they were awarded three set-pieces near the hosts’ box.

However, the Buccaneers were able to defend very well against the set-pieces with Hlatshwayo and Linda Mntambo making well-timed clearances.

The hosts grew into the match as it progressed and they had a chance to break the deadlock through Kabelo Dlamini, who was looking lively for the Soweto giants.

Dlamini tried to beat Ezekiel Morake with a curling shot, but the Galaxy goalkeeper produced a fine diving save to deny the Pirates attacking midfielder.

Bucs continued to give away set-pieces near their box and they were nearly punished by Sesinyi, whose effort hit the woodwork with goalkeeper Siyabonga Mpontshane rooted to the ground.

Pirates should have taken the lead on the stroke of half-time, but Jean-Marc Makusu Mundele was superbly denied by Morake from close range, and the score was 0-0 at the interval.

It took 10 minutes for the home side to break the deadlock in the second-half with Muwowo setting up Mntambo, who netted with a composed finish to make it 1-0 to Pirates.

Muwowo was a constant thorn in the side of Galaxy’s defence and he came close to grabbing his maiden goal for Bucs when Morake fantastically parried away the Zambian winger’s goalbound shot.

With side leading 4-0 on aggregate, Zinnbauer pulled out Hlatshwayo and Thabang Monare and he introduced Nkanyiso Zungu and Thabiso Sesane.

Zungu tried to make an immediate impact after Bucs were awarded a free-kick in a promising area, but the left-footed playmaker’s attempt from the set-piece was comfortably gathered by Morake.

The momentum was with the hosts in the dying minutes of the match and Morake produced two brilliant saves to deny Bongani Sam to ensure that the game ended in a 1-0 win in favour of Pirates.

The victory saw Pirates advance to the group stage after winning the tie 4-0 on aggregate – eliminating Galaxy in the process and Bucs will now face SuperSport United in a PSL game on February 24.

Sun Feb 21 , 2021
The Spurs boss gave a vehement rebuttal to the idea he needs to overhaul his approach after his side slipped to a fifth defeat in six top-flight games Jose Mourinho has rubbished suggestions that he needs to change his coaching philosophy after Tottenham’s latest Premier League loss, insisting that his […] 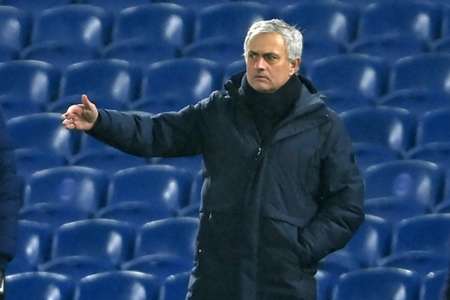