After facing lesser known teams in the previous stages of the competition, the Buccaneers now come up against perennial campaigners in Africa

Orlando Pirates face potential away match venue complications when they come up against ES Setif, Enyimba and Al Ahly Benghazi in the Caf Confederation Cup Group A.

The draw for Africa’s second-tier club competition was conducted on Monday, a day after Pirates sealed qualification for this stage of the competition following a 4-0 aggregate victory over Jwaneng Galaxy.

The Buccaneers will kickoff their group campaign by visiting two-time African champions Setif on March 10.

With Algeria not receiving South African teams due to the coronavirus pandemic, Pirates are likely to be confronted by similar challenges encountered by Kaizer Chiefs and Mamelodi Sundowns in the Caf Champions League.

Caf might have to find an alternative venue for this group opener against Setif as well as the Buccaneers’ visit to Nigerian giants, (two-time African champions) Enyimba scheduled for April 28.

This follows complications faced by Bloemfontein Celtic who failed to enter Nigeria for a Caf Confederation Cup first round match against Rivers United at the beinning of the year.

It is not yet clear if Libya will welcome Pirates for their clash against Al Ahly Benghazi on matchday three slated for April 2.

After the Soweto giants clashed against Sagrada Esperanca from Angola, as well as Botswana champions Jwaneng Galaxy on their way to the group phase, they now face different calibre of opponents.

With Josef Zinnbauer coaching in the Confederation Cup for the first time ever, the group stage provides the German tactician with a new challenge.

“It’s interesting for me, I get information about other countries,” Zinnbauer told the media.

“The systems they play, the players also get information and experience which is important for me as a coach. Young players like Azola, he had a good game and that’s a step forward for him. I saw him in a duel in midfield with one guy and he won the duel, it was good for me to see.

“Thabiso Sesane and Bongani Sam also, young players are playing international games and we can improve them from then.”

Mon Feb 22 , 2021
Tanzanian club Namungo FC will be placed in Group D of the Caf Confederation Cup if they eliminate their counterparts from the competition. The 2019/20 FA Cup finalists claimed a healthy 6-2 win against their opponents Primeiro de Agosto in the first leg of the final preliminary round, and are strong […] 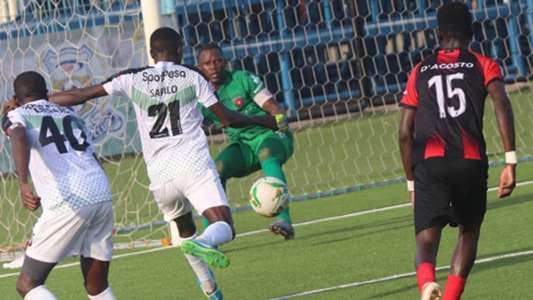