Francisca Ordega has urged Nigerian fans not to set high expectations for the Super Falcons in the 2021 Turkish Women’s Cup ahead of Saturday’s showdown with Uzbekistan.

The African champions started their campaign with a narrow 1-0 win over CSKA Moscow at Emir Sports Complex on Wednesday, with Ordega assisting Chinwendu Ihezuo’s winner.

Despite claiming a slim triumph over the Russian champions, the West African side struggled to impress in the second half.

But the former Shanghai striker assured that her side will get better in the course of the four-team championship in Antalya.

“I will appeal to Nigerians to keep supporting us. We desire more positivity and no negativity from them,” Ordega told Goal.

“This is a new team and a new coach. They should not expect too much from us, but we will not disappoint.”

We will continue to do our best. Putting on the green and white is everyone’s dream. Whenever we put it on, we should always strive to give our all.

“Even if we lose which will never be our intention, although I don’t pray we lose anyway. They should rather support us than criticise us. It will go a long way to help us get better.”

The Super Falcons reassembled for the first time since October 2019 when they bowed out of the Olympic qualifiers against Cote d’Ivoire.

After a win over CSKA, Ordega lauded her mates’ good fighting spirit in handing new coach Randy Waldrum a winning start in charge.

“It feels great to be back together as a team since October 2019,” she continued.

“Even before the game, the coach told us that it was a preparation competition for us. He said he’s not really interested in the result or the scoreline but he is keen about seeing our performance.

“He wanted to see how we will be able to play together as a team after a long time and also deal with pressure. I commend my teammates for a good fight and teamwork for the win.

“Overall, I believe we’re just starting and we had some lapses which we are working on and he has also pointed out that already to us.”

The first half was great [against CSKA Moscow] because we played to the coach’s instructions but the second half was not good enough.

“I believe in the second game we will step up and correct some of the mistakes we made in the first match. We will surely get there.

“If we win the tournament, it’s fine but we want to come together, know ourselves better and also have an idea of what the new coach wants from us.”

Sat Feb 20 , 2021
The South African speaks of revenge after the Red Devils arrived in Dar es Salaam for their clash against the Msimbazi giants Al Ahly coach Pitso Mosimane has predicted an equally difficult game when they take on Simba SC in their Group A match of the Caf Champions League on […] 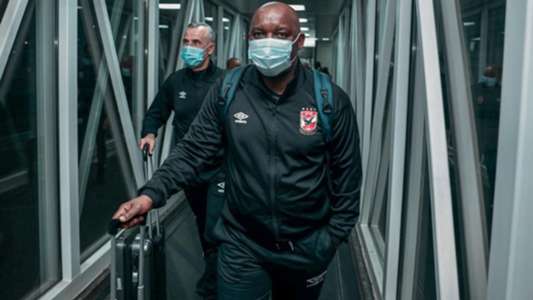