Galatasaray forward Henry Onyekuru has wished his teammates Fernando Muslera and Florin Andone quick recoveries after they suffered severe injuries at the weekend.

The players were forced off in the Yellow-Reds’ 2-0 defeat to Caykur Rizespor in Sunday’s Turkish Super Lig game at Caykur Didi Stadium.

The Turkish top-flight only recently returned, having been put on hold since March due to the coronavirus outbreak in Turkey and across the world.

Muslera could only play for 24 minutes in the encounter before he was replaced by Okan Kocuk after he suffered a double leg fracture following a collision with a Rizespor player in his area.

The Uruguayan goalkeeper is set to have surgery after Galatasaray confirmed he damaged his tibia and fibula.

Andone, meanwhile, only lasted for 24 minutes after replacing Ahmet Calik before he was stretchered off when he damaged his knee ligament.

Onyekuru returned to the Turk Telekom Stadi in January for a second spell on loan with the Turkish side from French outfit Monaco.

The forward made his eighth league appearance for the Yellow-Reds this campaign in the encounter as a second-half substitute, replacing Adem Buyuk in the 77th minute.

The Nigeria international has taken to social media to send a message of encouragement to his injured teammates.

“I am praying for a fast recovery for two of our soldiers Muslera and And one,” Onyekuru posted on Instagram.

“Horrible injuries to you both but I know you will be back stronger and better than ever my brothers.”

Onyekuru enjoyed success in his first loan stint with Galatasaray from Everton, scoring 14 goals in 31 league games to help them clinch the Super Lig title.

The winger left Goodison Park permanently last summer to join Monaco due to his failure to secure a work permit in England.

He will hope to play a prominent role and help third-placed Galatasaray return to winning ways when they face Gaziantep on Sunday.

Mbugi: Posta Rangers captain requests CS Amina to intervene and save them

Tue Jun 16 , 2020
Earlier on club, chairman John Tonui wrote to the Sports Ministry asking for help from the government Posta Rangers captain Joseph Mbugi has urged the Sports Cabinet Secretary Ambassador Amina Mohamed to come to their aid during the Covid-19 pandemic. The Mailmen were excluded from the stimulus fund which was […] 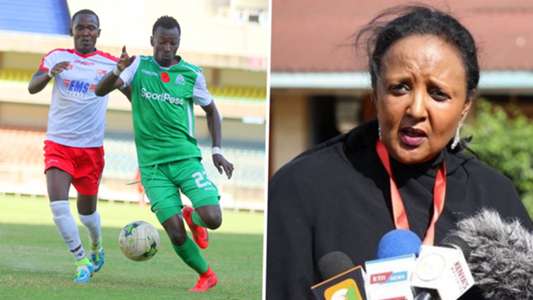