The Cameroon stopper shouldn’t fret despite his suspension as he still has time on his side and, so far, retains the support of the Dutch giants

African football was rocked on Friday when Andre Onana was slapped with a 12-month suspension from the sport for a doping violation, although Ajax have confirmed the decision will be appealed at the Court of Arbitration for Sport.

For a continent that doesn’t produce a deluge of top goalkeepers consistently, the Cameroon star was one who seemed to be rated highly in Europe and was linked to several top clubs like Chelsea, before they purchased Edouard Mendy from Rennes, and recently Borussia Dortmund, who were said to be considering the Central African as Roman Burki’s replacement.

The education of Onana, which saw him develop at Barcelona and now Ajax, meant he’s more or less built in the profile of a modern goalkeeper, capable at shot-stopping as he is with his feet. Of course, there have been a few mistakes but the improvement since moving from La Masia to Amsterdam has been stark.

He was averaging the highest saves per game figure (3.0 p/g) since moving to the Dutch club this season and was tied with Vitesse’s Remko Pasveer on nine clean sheets before the ban, which now threatens to stain his reputation and Ajax career.

For what it’s worth, the club’s CEO Edwin van der Sar has backed the 24-year-old, believing the incident — Onana had taken a pill prescribed to his wife after feeling unwell — was a genuine mistake.

“I am 100% convinced that the positive doping test was the result of a misunderstanding,” Van der Sar told De Telegraaf.  “That was a huge shock for us and the same was obviously true for him when we sought contact with him in Cameroon.

“Andre was not feeling well on the day of the check-up and thought he had taken a headache tablet, but it turned out that he had taken a pill from a strip of his wife’s medicine, which she had been prescribed after the pregnancy of their first child. It looked quite similar in name and the packaging. It’s stupid bad luck.”

As is usually the case, there’s an inclination to state the Cameroon goalkeeper should have known better. Still, the fact Furosemide doesn’t aid performance probably helps to validate the goalie’s claim he ingested the drug unwittingly.

“It doesn’t make you stronger or faster,” the former Manchester United stopper continues. “Andre, who has been checked many times, is the undisputed number one with us and Cameroon and is highly regarded by all top clubs. You don’t get that from one pill.”

Ostensibly, it appears Ajax are backing Onana publicly in light of the mishap, although it remains to be seen how they react if the imminent appeal is thrown out by CAS.

The ex-Barca man missed only two Eredivisie games in 16/17, one the following season and in 18/19. He’d also featured in all but one of de Godenzonen’s games last term before the campaign was annulled after the pandemic broke out.

Will the club wait a year for the goalie they’ve leaned on since 2016 by promoting from within or look for a short-term solution in the interim? While these are unlikely to harm Onana upon his return, buying a potential replacement this summer will pose immediate questions about the Cameroon international at the Johan Cruyff Arena, especially if the new buy is an instant hit in the capital.

Be that as it may, there’s a reason to believe Africa and the Eredivisie’s best shot-stopper in the last few seasons will come back stronger after his absence, regardless of Ajax’s decision to their appeal.

There might be an immediate inclination to point to a similar incident in the past involving Kolo Toure, who was banned for six months in March 2011 after testing positive for banned tablets he’d obtained through his wife.

Despite making 14 appearances in Manchester City’s Premier League title-winning year in 11/12, the centre-back’s career never truly recovered after that incident and the Cityzens released him in 2013.

However, the only parallels that can be drawn end there. Toure was already 30 when the incident occurred and was always unlikely to retain his place given the riches of the ambitious Manchester outfit. Onana, on the other hand, is just about to clock 25 and will be 26 if the 12-month suspension is upheld.

The Cameroonian theoretically still has age on his side after returning to redeem himself be it at Ajax or elsewhere, as opposed to Toure whose best years were behind him at the time and evidently on the wane in 2011.

Onana will still be in his prime years when he returns, and observers can only hope this absence doesn’t wreck the career of one of Africa’s best exports at a time the continent seems to be suffering a dearth of talent between the sticks.

Wed Feb 10 , 2021
Ivorian efforts could not save Jose Moncayo’s side from losing their 11th Primera Iberdrola match of the season Ida Guehai and Rebecca Elloh were on target as Logrono continued with their stuttering start to life in Primera Iberdrola this season following Wednesday’s 3-2 defeat to Valencia. Having bowed 2-0 against […] 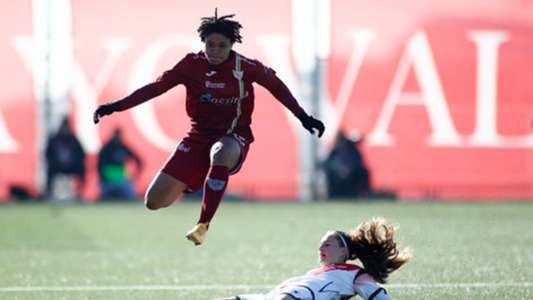