The towering striker made a transfer switch from Kashiwa Reysol of Japan to the Qatar Stars League outfit on January 12 and has gone ahead to play for the side with his first start seeing him score a hat-trick as they thrashed Al-Ahli Doha 6-0 in the Emir Cup Round of 16.

Olunga has now asked Kenyans in Doha to rally behind the team by telling the club’s official website: “At the outset, let me thank all Kenyans in Doha who have supported me since my arrival and made me feel that I am in my country, which will give me the motivation to work strongly in order to achieve a victory in all the confrontations we will fight.

“I invite them to come to the stadium and support the team and enjoy the good performances that my team presents.”

Olunga’s team is set to face Egyptian giants Al Ahly in the 2020 Fifa Club World Cup on Thursday and speaking on the match, the former Gor Mahia striker said: “It is definitely a good opportunity for me and my fellow players, and it is a challenge for everyone, and we are ready to play the matches and face the challenges that lie ahead.

“Here everyone trusts in my ability to contribute to the offensive line alongside my teammates, which is why I was definitely brought in, and inside the stadium, we all support each other, and this tournament will be a good opportunity for all of us, and on my side, I will do my best to provide the expected addition.”

On what he knows about Al Ahly, Olunga explained: “We know exactly the strength of Al-Ahly, which is a good and ancient team in the African continent and has reached this tournament several times and everyone in the club knows that, and this tournament is a challenge of a different kind.

“We must work very hard to achieve the expected appearance and the match will not be easy but it is an important and good opportunity to appear as required.”

Al Duhail will face the African champions with the winner coming up against Champions League winners and Bundesliga kings Bayern Munich.

Tue Feb 2 , 2021
The Blaugrana boss has admitted there is a chance the Argentine will bring the curtain down on his illustrious career at Camp Nou later in the year Ronald Koeman says he’s “not confident” that Lionel Messi will stay at Barcelona, but cannot imagine him playing for another club. Messi has […] 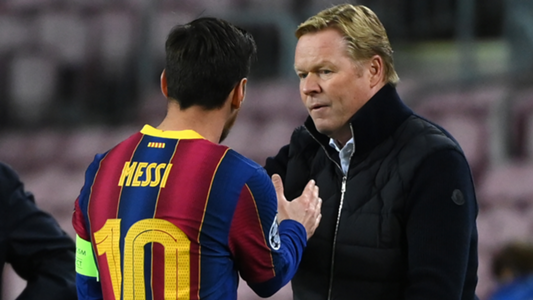