Oladapo Afolayan made a flying senior debut for West Ham United in Saturday’s 4-0 defeat of Doncaster Rovers in a fourth round FA Cup game.

The 23-year-old, who returned to the Hammers after completing loan moves to Oldham Athletic and Mansfield Town, was brought on for Tomas Soucek in the 70th minute and he did not disappoint – finding the net just eight minutes after his introduction.

Prior to this match, Afolayan had played for West Ham’s U23s against Tottenham Hotspur on Friday night. Against the Donny, he showed no signs of fatigue as he ran into the box to score a rebound from goalkeeper Ellery Balcombe’s save off Ryan Fredericks.

Pablo Fornals put David Moyes’ team ahead in the second minute with a fine finish after profiting from an assist from Fredericks.

In the 32nd minute, Andriy Yarmolenko doubled the advantage by stylishly finding the net after Algeria international Said Benrahma had taken over possession deep in Doncaster territory.

Things got worse for Darren Moore’s team in the 54th minute as Andrew Butler turned the ball into his own net while trying to intervene after Issa Diop flicked on a corner kick at the near post.

Doncaster did attempt to stem the tide of Hammers shots after Butler’s own goal, and nearly pulled one back in the 60th minute through Matt Smith, who took a touch to control a Jon Taylor cross at the far post, received the ball out of his feet and lash at goal, with the ball rattling the top of the crossbar on its way over.

Diop and Benrahma were on parade from start to finish by the hosts, while Jason Lokilo was handed a starter’s role before giving way for Angola international Elliot Simoes in the 64th minute.

Thanks to this result, West Ham United will face either Mohamed Salah’s Liverpool or Odion Ighalo’s Manchester United in the fifth round. Before then, the Hammers who have won their last five games across all competitions travel to the Selhurst Park for a date with Roy Hodgson’s Crystal Palace on January 26 before squaring up against Liverpool, Aston Villa and Fulham.

Sat Jan 23 , 2021
Lanus were dispatched 3-0 in a one-sided final on Saturday to send the continental crown to Florencio Varela Former Chelsea, Inter, Parma and Argentina star Hernan Crespo celebrated his first title as a coach on Saturday as he led Defensa y Justicia to victory in the Copa Sudamericana.  The Florencio Varela, […] 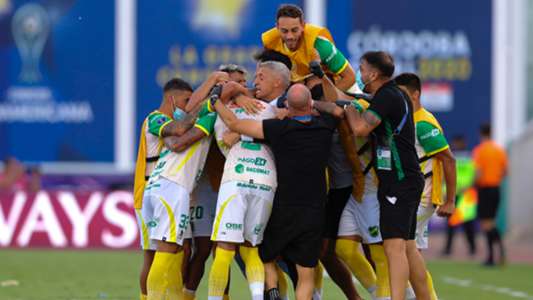