The Nigerian had gone on a run of four games without finding the net in the league. Against the visitors, nevertheless, he rediscovered his scoring form with a fine strike.

Having played eight games without defeat across all competitions, the Black Sea Storm travelled to the New Malatya Stadium with the ambition of extending their awe-inspiring run against Hamza Hamzaoglu’s team who laboured to a 2-2 draw versus Goztepe their last time out.

From the blast of the referee’s whistle, both teams showed the desire to grab all maximum points by creating several goalscoring opportunities.

Nwakaeme put the visitors ahead in the 28th minute, albeit, it was cancelled by referee Erkan Ozdamar after VAR replays ruled that the Super Eagles had been in an offside position.

Five minutes into the second-half, Anastasios Bakasetas handed Trabzonspor the lead. With goalkeeper Abdulsamed Damlu punching out a dangerous free-kick, the Greek forward picked the rebound, controlled the ball before unleashing a beauty past Damlu.

That deficit saw the hosts come out in their numbers in search of an equaliser. However, their efforts met a strong resistance from a solid Black Sea Storm backline.

In the closing stages of the tie, Nwakaeme had the final say – dribbling past Issam Chebake before sending a ferocious shot past the goalkeeper.

That strike was the former Hapoel Ra’anana and Hapoel Be’er Sheva forward’s sixth of the 2020-21 campaign in 19 outings.

While he was on parade from start to finish, Ghana’s Caleb Ekuban who was named in the starting XI got substituted for Flavio in the 77th minute as Congolese striker Benik Afobe replaced Cape Verde international Djanini Tvaris with four minutes left to play.

For the hosts, Morocco’s Chebake, Zimbabwe’s Teenage Hadebe plus Ghana’s duo of Afriyie Acquah and Benjamin Tetteh were in action from start to finish. Cote d’Ivoire’s Moryke Fofana was introduced for Zeki Yavru in the 82nd minute. Whereas, Burundi international Jospin Nshimirimana was an unused substitute.

With this result, Trabzonspor occupy the fourth position having accrued 42 points from 23 games – six points behind leaders Galatasaray.

Mon Feb 8 , 2021
The West Ham midfielder never wanted his professional feud with the official to be made personal by fans West Ham midfielder Tomas Soucek is dismayed by the online abuse hurled at Mike Dean after the referee controversially sent him off against Fulham over the weekend. While Soucek thought the red […] 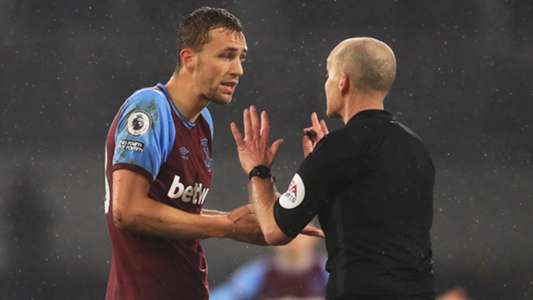