NorthEast United are now unbeaten in their last seven games…

While NorthEast United boss Khalid Jamil felt Odisha put up a fight in his team’s 3-1 win in the Indian Super League (ISL) on Sunday, the game gave us a different picture.

Luis Machado picked up a brace and Deshorn Brown also scored in the first half itself to give the Highlanders a healthy lead going into the break. Bradden Inman netted a goal for Odisha before the break but NorthEast United survived their opponents’ second-half pressure to seal a crucial win in the race for the playoffs.

After the game, the Highlanders boss had said, “I don’t think it was easy. It was a really difficult game. For us, it was important to finish the game and to focus from the first to the last minute.” However, his side was cruising to an easy victory at half-time.

Odisha boss Gerry Peyton was forced to make a choice in the midfield on the morning of the game as Cole Alexander was ruled out due to viral fever. They ultimately placed Gaurav Bora and Vinit Rai together in front of the defence but it also meant relinquishing dominance.

It was the Federico Gallego and Luis Machado show in the first half that blew Odisha out of the contest. The first 25 minutes of the game saw some of the best football played by any team in the ISL this season.

Ashutosh Mehta, who continued to make an impression at both ends of the pitch with his marauding runs and crosses, proved his quality in the final third once again by picking out Luis Machado at the edge of the box from the right flank. From a chance that would have normally seen players take a touch, make room and shoot, Machado attempted a terrific first-time volley to beat the keeper and find the bottom corner of the net as early as the ninth minute.

There were plenty of gaps between the Odisha defence and the midfield that were not addressed up until the start of the second half and NorthEast forwards, especially Federico Gallego who made use of the vacant space, enjoyed a lot of time on the ball.

Soon after the opening goal, Gallego played a delightful, defence-splitting through-ball to feed Deshorn Brown in behind the defence and striker did the rest. The former Bengaluru reject entered the box and found the net with a strike that sent the ball through the gap between the keeper’s legs.

Odisha were stunned again in the 24th minute. The ever-present Gallego picked out Machado’s well-timed run-in behind the defence with a magnificent lobbed pass and the forward completed the attractive build-up with a terrific header to put NorthEast three goals ahead.

A football game may last 90 minutes but the contest seemed to come to an end then and there for Odisha. They looked demotivated, clueless and simply didn’t have the energy to match NorthEast.

Bradden Inman scored a goal just before the break to plant hopeful seeds of a potential comeback in the second half and Odisha did see a lot of the ball after the break. However, it was more than likely to do with how NorthEast stepped off the gas, having taken a solid lead already.

Peyton’s response was to replace Sajid Dhot with Diego Mauricio who is only one goal away from becoming Odisha’s all-time highest goalscorer. However, the in-form forward couldn’t conjure a comeback against an assured defence led by Benjamin Lambot.

The only period Odisha were on top was during the final few minutes of the game where they actually looked like they may score a goal. But it was too late by then. If Odisha had started the game like how they ended it, maybe they stood a chance.

Mon Feb 15 , 2021
This time last year, Jeakson Singh was enjoying a very good personal season at Kerala Blasters.  In his first full season at the club, he made 13 appearances and clocked over 800 minutes. He had quite easily become an important player for the then coach Eelco Schattorie in midfield.  Fast forward […] 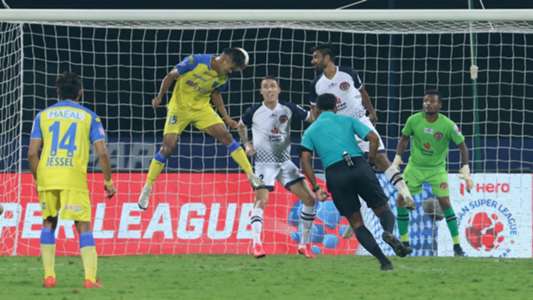