FC Goa will look to return to winning ways when they take on Jamshedpur on Thursday evening.

But to get the three points they have to contain an in-form Nerijus Valskis who is leading the goalscoring charts with eight strikes next to his name. However, FC Goa’s coach Juan Ferrando is not thinking about individuals and is focusing on their opponents as a whole.

“I believe in my squad. No individual plan for anyone. Be it Valskis, Lima or Jackichand. For us, it is important to play as a team and to prepare against the Jamshedpur side. Jamshedpur is a very good team. We have to improve game by game. We try to find our mistakes and in the training, we are working on it. We don’t want to repeat the same mistakes.

“They are strong in set-pieces. But we have a solution. It is important for us to control the timing and space. The last goal from Valskis was perfect. But the aim is to control the second ball,” stated the manager.

Goa have collected 15 points and are fourth on the table after 10 rounds of games. They have relied on young players like Saviour Gama and Princeton Rebello. Ferrando wants to provide such players with more opportunities and help them grow.

“My target is to help the young players get better and become important players for our squad. We have just two or three training sessions between games including recovery. This is a problem. We need more time to prepare for a team.

“Our target is to get three points every game. In the first round, we are not completely happy. We move game by game. After Jamshedpur, we have ATK Mohun Bagan. It is difficult in football to be completely happy. We lost four easy points. We have got some exciting young players. The character of the players and personality has been a big positive.”

Goa currently have six foreigners in their roster. They can add one more foreign player to their squad and the 39-year-old manager informed that his coaching staff is actively looking to fill the quota.

“We are checking players but it is important to get players who can help the team and help the young players improve. These two points are very important. If we don’t get players fulfilling these two criteria I am happy with the squad until the end of the season. “

Skipper Edu Bedia has been playing from a deeper position than his usual attacking midfield slot. But he mentioned that he has no qualms playing as a number six. He also opined that ISL has grown to be more competitive compared to when he joined three years ago.

“To be honest, I am comfortable playing in both positions (number six and eight). Previously, I have played as a number eight and number six. But speaking from a personal perspective I prefer playing as a six as I can control the game and have more touches on the ball. Yes, it is true that in the last few years I have been playing in a more advanced position but I am comfortable in a number six position.

“The league is getting more competitive. I think the teams are a lot more balanced and are signing better players. (But) with the exception of a couple of teams, who have a fair bit of budget and can spend the way they like,” stated Bedia.

Wed Jan 13 , 2021
The Gunners midfielder has come to support the Kenyan boy he helped with playing boots two years ago once again Arsenal midfielder Mesut Ozil has shown his class off the pitch again by assisting a young Kenyan boy, Lawrence Masira, with a signed autograph and a bag full of face masks. Ozil, […] 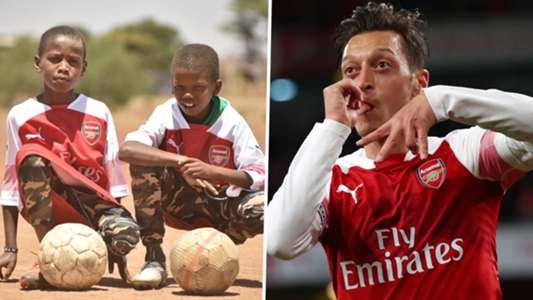