Mesut Ozil appeared to show he is still completely committed to Arsenal after posting an image of him clutching the Gunners badge accompanied by the words “no matter what”.

The Gunners midfielder was absent from the matchday squad for his side’s 3-0 defeat at the hands of Manchester City on Wednesday, with Mikel Arteta having revealed he was left out due to tactical reasons.

Having featured heavily since Arteta’s appointment as head coach back in December 2019 it was something of a surprise to not see the German named as part of Arsenal’s 20-man travelling squad.

Indeed, the north Londoners suffered a double injury blow in the first half – with both Granit Xhaka and Pablo Mari forced off injured – with Raheem Sterling eventually giving the hosts the lead at the Etihad Stadium.

That came about largely because of an error by Mari’s replacement David Luiz, with the centre-back, whose contract expires with the Gunners at the end of June, failing to clear to allow the England winger to slam home.

No matter what … #M1Ö @Arsenal pic.twitter.com/WFmNoxpGBc

And it went from bad to worse for Luiz, with the Brazilian then sent off for pulling back Riyad Mahrez – Kevin De Bruyne netted the resulting spot-kick before Phil Foden added a third goal to make sure of the points.

Arteta was forced to field questions about Luiz’s future, as well as his decision to drop Ozil, in his post-match media briefings after what was a disappointing display from the Gunners that dented their hopes of finishing in the top four.

And less than a day after the event, Ozil has now responded on social media as he posted an image that shows him proudly clutching the club badge on his shirt, along with the text “No matter what…”.

Thu Jun 18 , 2020
The team’s top official says there was need for the federation to seek their opinion on the UPL fate Busoga United chair Diana Nyago has claimed the Federation of Uganda Football Associations (Fufa) erred after cancelling the Premier League without consultation with the clubs. Nyago says there was a need […] 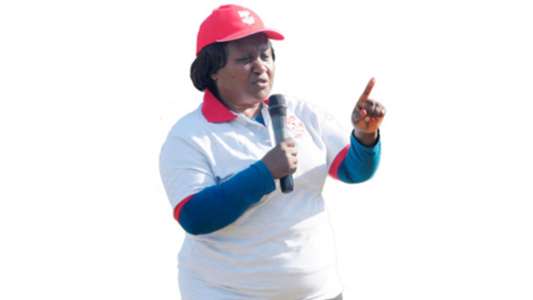