Nigeria striker Umar Sadiq was shown a red card as Almeria battled for a 1-1 draw against Fuenlabrada in the Spanish second division.

The 24-year-old was making his 21st appearance in the Segunda Division on Saturday but he could not add to his tally of 11 goals as the Rojiblancos failed to win their second successive league match on the road.

Sadiq was first booked in the 30th minute but he was later punished with another yellow card in the 53rd minute which resulted in his sending off.

Despite going down to 10 men, Almeria managed to pick up a point in Fuenlabrada as Fran Villalba’s 89th-minute goal cancelled out Randy Nteka’s opener in the final 10 minutes.

Saturday’s expulsion was the second time Sadiq has been sent off in a league match in his career after he was giving marching orders in a Serie B match between Perugia and Salernitana in the 2018-19 season.

However, thanks to his goalscoring form last month, Sadiq was named the Player of the Month for January in the Spanish second-tier by LaLiga.

🇳🇬 Sadiq Umar is the #LaLigaSmartBank Player of the Month for January! 👏

The former Rangers and AS Roma striker contributed five goals and an assist in three matches for Almeria who occupy the second spot in the league table.

The Kaduna-born star is having a fine debut campaign in Spain and he is a goal shy from equalling his best scoring record in a league season when he scored 12 goals for Partizan Belgrade in the 2019-20 Serbian Super Liga.

Sadiq will be unavailable for Almeria’s league match against Las Palmas next Saturday as he serves a one-game ban, but the Nigeria striker is expected to return to Jose Gomes’ team for their trip to Mallorca on February 21.

Although they have a game in hand, second-placed Almeria are five points behind Mallorca who sit at the top of the Segunda Division table.

Sun Feb 7 , 2021
The Super Eagles striker could not rescue the Parthenopeans from crumbling against Davide Ballardini’s side Victor Osimhen was on parade for Napoli, albeit, could do little as they lost 2-1 to Genoa in Saturday’s Serie A encounter. The fit-again Nigeria international made a cameo appearance in Wednesday’s 0-0 Copa Italia […] 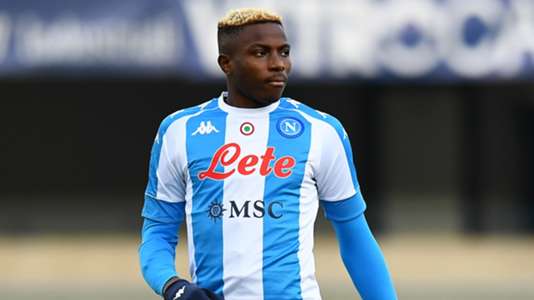