Alex Meret came into the Napoli side and saved from Paulo Dybala, while Danilo also missed in Juventus’ Coppa Italia final shootout defeat.

The Partenopei deserved their sixth cup triumph after passing up some big chances in the 90 minutes as Juve’s star attackers failed to show at the Stadio Olimpico.

Gianluigi Buffon made a succession of vital stops and the stage appeared set for the veteran to lead the Bianconeri to glory in the shootout, yet two team-mates failed from the spot as Napoli kept their nerve.

The ex-Chelsea boss spent three years in Naples and failed to get the better of Juve, where his contentious appointment at the start of this season has not yet delivered silverware.

Sarri’s side saw their best opportunity arrive in the first five minutes of the final, but Meret was equal to Cristiano Ronaldo’s low shot after Dybala pounced on a defensive error.

The best of the efforts came at the other end, starting with Lorenzo Insigne’s curling free-kick that bounced away off the left-hand post.

Pressure built on Buffon’s goal heading into the interval and he blocked with his legs from Diego Demme’s drive and then touched another Insigne attempt around the post.

Napoli substitute Arkadiusz Milik blasted off target from a dangerous position in the second period, while Insigne was similarly wayward when faced with a tight angle.

Further Buffon heroics were reserved for the final seconds of stoppage time, as the World Cup winner got down to Nikola Maksimovic’s powerful header before helping to divert Eljif Elmas’ close-range follow-up away via the upright.

But it would be Meret, not Buffon, who would prove the match-winner, saving superbly from Dybala and watching Danilo hack an awful penalty over the crossbar.

Insigne, Matteo Politano, Maksimovic and Milik all found the net to secure Napoli’s first trophy since winning the Supercoppa Italiana under Rafael Benitez – Sarri’s predecessor – in 2014, also against Juve after a shootout.

What does it mean? Sarri’s misery continues

Sarri was beloved at Napoli despite his failure to deliver trophies because his style of football was revered across Europe.

Juventus have not played with the same swagger since his arrival, though, with a successful team seemingly struggling to adapt to his methods.

The coach’s popularity is hardly likely to swell if the Bianconeri continue to squander opportunities to add to their honours list. Beaten by Lazio in the Supercoppa, they have come up short again in the Coppa and face a title tussle in Serie A.

Buffon had won as many Coppas as Napoli coming into this clash and appeared determined to beat his opponents to number six.

But his saves counted for little as Meret came out on top in the shootout. Dropped by Gennaro Gattuso earlier this year, the 23-year-old ensured he will now forever be a favourite at Stadio San Paolo.

Juve way off it

Besides Buffon, there was scarcely a player in the Juve ranks who could take pride in his efforts here.

Sloppy play in defence led to the openings that Buffon brilliantly closed, while they posed little threat going the other way.

Danilo’s dreadful penalty summed up the efforts of the outfield stars.

Wed Jun 17 , 2020
Manchester City 3-0 Arsenal: Sterling and De Bruyne benefit from David Luiz’s nightmare It was a night to forget for David Luiz as Arsenal returned to Premier League with a limp 3-0 defeat at Manchester City. Raheem Sterling, Kevin De Bruyne and Phil Foden were on target as Manchester City […] 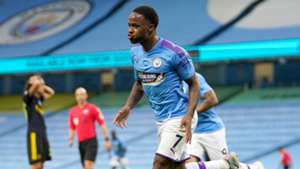