Namungo FC have made a huge stride towards the Caf Confederation Cup group stage after winning the first leg of their final preliminary round against Primeiro de Agosto 6-2 at Azam Complex in Chamazi, Dar es Salaam.

Prior to the game, the authorities had indicated five D’Agosto players had tested Covid-19 positive and as a result, they had to be omitted from the match-day squad.

Despite the changes, it was the hosts who managed to score first. Namungo conceded a penalty in the 11th minute that was taken by Herenilson Carmo. However, goalkeeper Jonathan Namungo saved it only for Brayan Moyo to score from the rebound.

However, the East Africans replied in the 32nd minute when Manyanya headed in a cross from the right to make it one-all.

The visitors managed to get their second game in the 38th minute courtesy of Sabilo, who did not miss from close range after a concentration lapse by the defenders.

The Angolans needed five minutes after the break to level the scores through Mongo Bokamba, who outpaced his opponents before beating the goalkeeper from a close range.

Namungo upped their tempo and were rewarded in the 55th minute when Lusajo received the ball in a good area and composed himself before shooting the ball past the custodian to score the team’s third.

Sabilo was on target four minutes later as the opponents looked lost and confused. The forward was unmarked in the danger zone and he had no problem getting his brace.

The Tanzanians continued pushing for more goals to be in a good position to make their maiden appearance in the group stage, and they were rewarded when Kwizera hit the back of the net in the 64th minute.

Namungo were not done and they scored their sixth with 20 minutes to go. Ghanaian Sey was left unmarked as a corner was played in, and he connected well with his shot to ensure he gets his name on the score sheet.

Agosto had a chance to make the scoreline respectable after winning a penalty moments later, but once again, Nahimana denied them, this time around ensuring Yazid Atouba’s effort was safe in his hands.

Namungo will now host their opponents at the same venue on Thursday hoping to advance.

Sun Feb 21 , 2021
Kerala Blasters held 10-man Chennaiyin to a 1-1 draw in the Indian Super League 2020-21 clash at the GMC Stadium in Bambolim on Sunday.  Interim coach Ishfaq Ahmed admitted that he would have liked his team to maintain a clean sheet as they worked on fine-tuning the defence after Kibu Vicuna parted […] 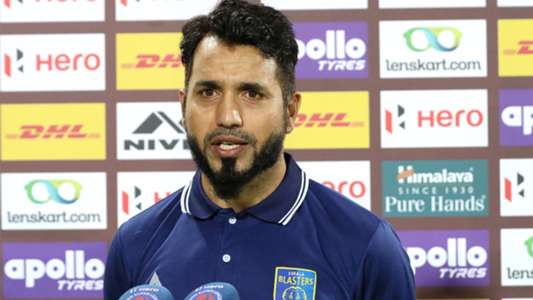