Farid Mussa scored for Taifa Stars in the second half after a goalkeeping error to boost the Taifa Stars’ hopes of reaching the knockout stages.

Etienne Ndayiragije’s charges came into the match without the services of the influential captain John Raphael Bocco, defender Erasto Nyoni, who failed a late fitness test, as well as Ibrahim Ame.

The Brave Warriors had to play without their captain Dynamo Fredericks who was injured as well.

Both teams were unsettled in the early exchanges owing to pressure to get an early goal.

With Guinea and Zambia playing to a 1-1 draw earlier on, it was vital for any of the two sides to get maximum points to stand a chance of making it to the quarter-finals.

The East Africans started the match on a high, hoping to get an early goal to destabilize their opponents. Ayub Lyanga and Charles Manyama had half-chances in the opening 10 minutes, but they did not manage to find the back of the net.

On the other hand, Marcel Papama had a good chance to put the ball in the back of the net when a good cross found Aishi Manula off guard, but the attacker missed the ball with the net at his mercy.

The best chance of the first half fell to Mussa in the 29th minute, but goalkeeper Kamaijanda Ndisiro pulled a fantastic save to deny him from point-blank range.

After the pause, the Brave Warriors came back stronger. Elmo Kambindu was fouled in about 30-yards from the goal. Papama used the opportunity to test Aishi Manula who did well to deal to clear the danger.

In the 63rd minute, Mussa managed to pass the ball to the unmarked Lyanga on the edge of the 18-yard area. The forward worked his way into the danger zone but his fierce shot was parried away by the goalkeeper for an unfruitful corner.

However, two minutes later, Stars managed to get the ball in the back of the net. Lyanga played a good ball into the box, and the goalkeeper missed it, allowing Feisal Salum to head it down for Mussa, who did not have a problem finding the back of the net.

Moments later, the match was stopped for 19 minutes owing to power problems as some floodlights went off.

The match eventually resumed, with Namibia pushing for an equalizer.

In the 77th minute, Isaskar Gurirab was fed the ball in a promising position. He beat the defender, as well as the on-rushing Manula, but his attempt narrowly missed the target.

Guinea and Zambia are on four points each while Tanzania are on three, with Namibia eliminated from the competition.

Sat Jan 23 , 2021
The Belgium international scored one goal and created another in the win over Alaves Zinedine Zidane’s assistant David Bettoni has said Real Madrid need to be patient with Eden Hazard following his starring role against Alaves on Saturday. The Belgium superstar has had a tough time at Real since making the […] 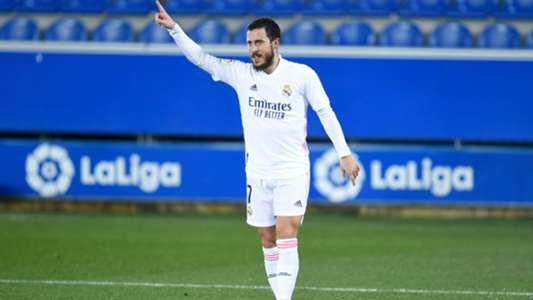