Daniel Sikorski has revealed that Bayern Munich forward Thomas Muller had a negative reaction to spicy food that prompted him to miss a a training session.

The Polish-born forward, who now plies his trade in Spain for lower-league side Guijuelo, spent a portion of his career with Bayern.

He never made a first-team appearance, but took part in sessions and travelled with the squad for training camps.

On one occasion, Bayern’s reserves, who Muller was also playing for at the time, had a trip to India and the conditions were far removed from the five-star treatment normally afforded elite footballers.

Taking up the story, Sikorski said: “We stayed in a hotel near the Himalayas that had no mattresses. Instead we slept on boards. The showers were buckets of water and for dinner there were chips and coke from what felt like 1953.

“When we got a real meal somewhere else, Thomas almost poisoned himself. Our food said “not spicy”, but it was spicy without end. Thomas didn’t get on with that.

“The next day he just went to the bathroom instead of training.”

The 33-year-old was on Bayern’s books from 2005-2010, meaning he spent one season under the stewardship of Van Gaal.

The legendary coach brought an aura with him, and Sikorski says it was interesting to see superstar players fall into line.

“Under van Gaal I was twice as tired after each training session as usual,” he said. “I wanted to avoid mistakes at all costs because I experienced how he yelled at other players. I had tremendous respect for him.

“When he stood in front of me with his massive body, the fear sweat was flowing – and I think the players from the first team felt the same.

“Before team dinners he always got up first and called the tables after each other, to get food from the buffet. It was interesting to see that experienced players were okay with something like that.”

Why do U.S. soccer clubs sing the national anthem?

Tue Feb 23 , 2021
Whereas the likes of European countries only sing their national anthem before an international game, U.S. clubs do the anthem tradition differently Unlike Europe, the U.S. (and also Canada) always play the national anthem before games no matter the sport, from American football to MLS games. All games, be it domestic […] 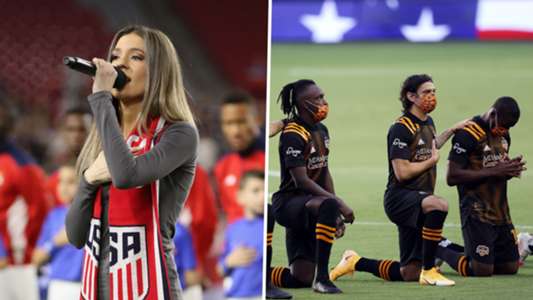