Thomas Muller has been criticised by Bayern Munich sporting director Hasan Salihamidzic after comments he made regarding the club’s transfer activity.

Muller raised some eyebrows on Wednesday when, following Bayern’s 2-1 DFB-Pokal semi-final win over Eintracht Frankfurt , he raised the issue of a “paradox” in the club’s finances.

The experienced forward questioned the logic of Bayern being linked with big-money moves for players like Kai Havertz while the current squad take pay cuts to help the club through the coronavirus crisis.

Salihamidzic wasn’t pleased with Muller’s comments, but he says the pair have smoothed over any issues.

“After the cup game, Thomas, when he wasn’t so happy with the team’s performance, maybe chose the wrong path with his words,” Salihamidzic told Sky Germany .

“We talked about it the next day. We sat down and I told him it wasn’t correct.

Despite his concerns, Muller was happy enough to talk up a Bayern move for Havertz .

The Bayer Leverkusen star is one of the most in-demand young players in world football, and Muller admitted “we always want the best players at Bayern.”

For the time being, Bayern’s focus is on the Bundesliga title, now just one win away following their 2-1 victory over Borussia Monchengladbach on Saturday .

In terms of transfers, Bayern also have one eye on the ongoing uncertainty surrounding the future of David Alaba.

His contract expires next summer, and there has been plenty of speculation suggesting he could be heading for the exit after a decade at the Allianz Arena.

“We are very happy with how David has developed this season. He is the boss in defence and has become a key figure,” Salihamidzic said.

“We have already had a few conversations and will continue to talk to each other, but at the moment we are all concentrating on the sporting side of things.

“Everything in good time – we will try everything and I think all parties know what they have in common. David knows what he has at Bayern and vice versa, of course.”

Alaba recently suggested he expects progress to be made over a new deal in the coming weeks .

Sat Jun 13 , 2020
Coppa Italia He pulls one goal clear of Hamsik FILIPPO MONTEFORTEAFP It’s Napoli who will meet Juventus in the final of the Coppa Italia, with Saturday night’s 1-1 draw earning them a 2-1 aggregate victory over Inter. Dries Mertens was the hero and it’s a night he’ll remember forever as he […] 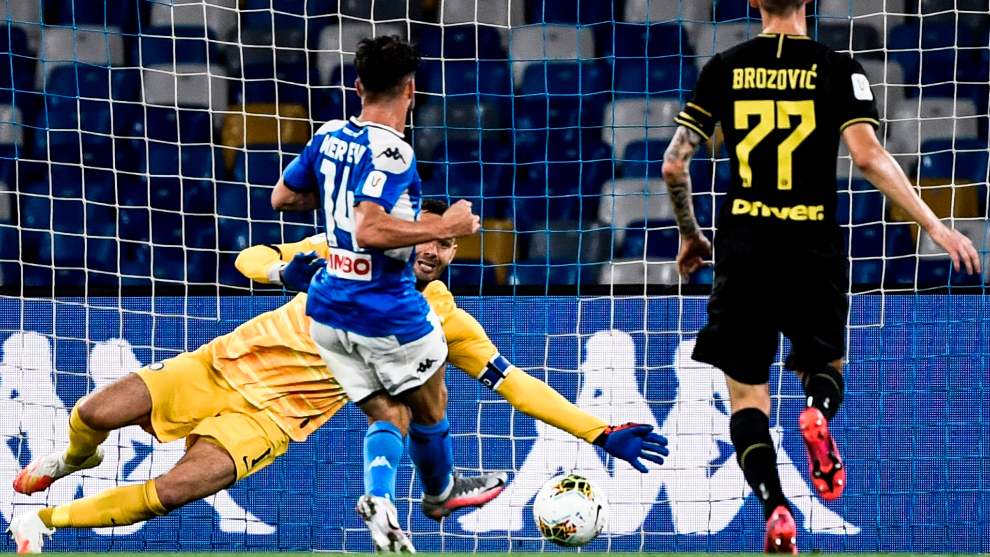