David Moyes broke his curse against Jose Mourinho after West Ham’s victory over Tottenham in a London derby clash on Sunday.

Goals from Michail Antonio and Jesse Lingard saw the Hammers beat Spurs 2-1 at the London Stadium, with Lucas Moura grabbing what ultimately proved to nothing more than a consolation effort for the visitors.

West Ham leapfrogged Chelsea back into fourth place in the Premier League as a result, while Moyes brought his hoodoo against sides managed by Mourinho to an end 16 years on from their first-ever meeting (while in charge of Everton and Chelsea respectively).

Mourinho had not lost in any 15 of his previous matches against Moyes, having also faced the Scot during spells at Manchester United and Chelsea.

Moyes, who also managed United and took in his first short-term stint with the Hammers in 2017-18, was only able to record six draws in those games alongside a grand total of nine losses, but he finally managed to get the better of his Portuguese counterpart at the weekend.

Mourinho had remained unbeaten against Moyes for longer than any manager he has ever faced, but that cloak of invulnerability has now been pulled away and Spurs are in great danger of finishing the season behind the high-flying Hammers.

3 – Jesse Lingard has as many Premier League goals under David Moyes (3 in 4 games for West Ham) as he did under Ole Gunnar Solskjaer (3 in 36 games for Man Utd). Upturn. #WHUTOT pic.twitter.com/IXHimitnmM

Tottenham looked like genuine title contenders after reaching the Premier League summit in November, but have since experienced a dramatic fall from grace which has heaped pressure on Mourinho.

Spurs have only won three of their last ten top-flight matches, with four losses included during that period, and they are sitting nine points adrift of the Champions League places with only 14 games left to play.

Mourinho has now suffered 15 defeats in his first 50 games in charge at Tottenham, which is more than double the amount in his first half-century of matches with any other side.

The Lilywhites latest setback also saw them concede in the opening five minutes of each half – another first in Mourinho’s career – and the 81 points they have amassed from his first 50 games at the helm is another all-time low for the 58-year-old.

Tottenham must now pick themselves up ahead of a second leg round of 32 Europa League clash against Wolfsberger on Thursday, which comes four days before a Premier League clash with Burnley.

West Ham, meanwhile, are due to travel to league leaders Manchester City next weekend as they continue to fight for a top-four finish.

Sun Feb 21 , 2021
The six-time Ballon d’Or winner set yet another new record at Camp Nou after lining up for Ronald Koeman’s side in La Liga at the weekend Lionel Messi marked his latest Barcelona milestone with a goal against Cadiz as he surpassed club legend Xavi in the Camp Nou history books, […] 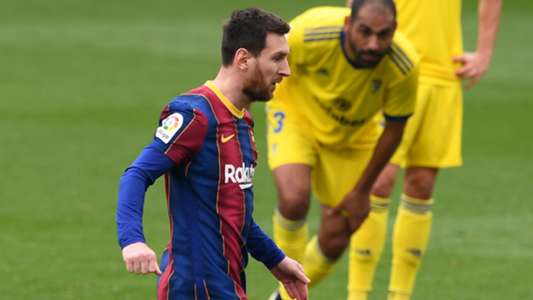