Thomas Tuchel’s side blew away Crystal Palace in their latest Premier League game, with a promising trident established in the final third

Mason Mount is excited by the potential of Chelsea’s new-look front three, with the England international thriving for the Blues alongside Christian Pulisic and Kai Havertz.

The young trio helped the Blues to a crushing 4-1 win over Crystal Palace last time out, with Pulisic and Havertz among the goals as Mount was named Man of the Match.

Thomas Tuchel may have stumbled upon an attacking trident that can go on to rival those elsewhere, such as at Liverpool, with the early indications being a system favouring energetic playmakers and a false nine is the way forward.

Mount told Chelsea’s official website of working alongside USMNT star Pulisic and Germany international Havertz: “I don’t think it has come together like that since our first game together.

“It was always coming; it was always brewing. We started off very sharp. At the top of the pitch our combinations were good, we were creating chances and we took them. That’s something we probably haven’t been doing as much recently.

“We know we have a lot of quality in the team. When we’re on it and we’re creating chances we can score a lot of goals. It hadn’t happened like that but it has now and that’s great for us.

“We came into the game with a lot of confidence after Porto knowing what we can do. As a team we felt very strong. We know what is on the line. We’re still in three competitions so every game is so important.

Has Tuchel got Chelsea firing?

The Blues’ German boss has suffered just one defeat in his Stamford Bridge reign so far. The perfect response to a shock 5-2 setback against West Brom was offered at Selhurst Park, as Chelsea built on their positive Champions Leaue quarter-final outing against Porto.

Havertz starred against the Eagles as he netted one and made another, and the 21-year-old is finally starting to justify the faith that saw £70 million ($96m) invested in his potential.

Mount said: “Him in the box is very dangerous. He opened up on his left [against Palace] and tucked it into the far corner, and that’s what we see in training. It was a brilliant finish and I’m very happy for him.”

Chelsea have a return date with Porto on Tuesday, in a contest that they currently lead 2-0, before taking on Manchester City in the FA Cup semi-finals on Saturday.

Mon Apr 12 , 2021
The Nigeria forward sealed maximum points for Gennaro Gattuso’s men with his late strike in Sunday’s away win in Genoa Former Inter Milan and Paris Saint-Germain midfielder Benoit Cauet said Victor Osimhen has started showing his potential at Napoli after he scored his fifth Serie A goal on Sunday. The 22-year-old […] 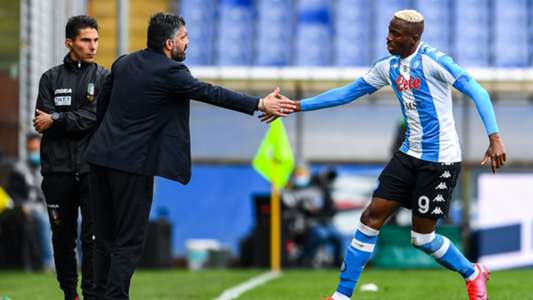