Soufiane Rahimi has expressed his gratitude to African football legend Samuel Eto’o for recognising his exploits at the 2021 African Nations Championship.

The forward played a key role in helping the Atlas Lions successfully defend the title won on home soil in Cameroon – scoring five goals in five matches – which earned him the topscorer’s prize as well as the tournament’s Most Valuable Player accolade.

Eto’o had taken to social media to congratulate the North African country as well as the Raja Casablanca star for their exploits at the sixth edition of the biennial African football showpiece.

“Congratulations to Morocco for winning the African Nations Championship! Well done to Cameroon for organizing a beautiful tournament – it was an honour to be there and present the Man of the Competition award to Soufiane Rahimi! Huge respect to all the teams,” the former Barcelona and Inter Milan forward tweeted.

Congratulations to Morocco for winning the African Nations Championship! Well done to Cameroon for organizing a beautiful tournament – it was an honour to be there and present the Man of the Competition award to @SoufianeRahimi2! Huge respect to all the teams. #totalchan2020 pic.twitter.com/7cdOGH16YO

— Samuel Eto’o (@SamuelEtoo) February 10, 2021In his response, the 25-year-old considered it a privilege seeing the ‘world-class legend’ testify to his feats in Cameroon.

“Thank you so much. It’s an honour for me to read this testimony from a world-class legend and the player who made us all proud of our continent. Samuel Eto’o!,” Rahimi tweeted.

Thank you so much. It’s an honor for me to read this testimony from a world-class legend and the player who made us all proud of our continent. @SamuelEtoo 🎩 https://t.co/1KdmX2RjOT

Rahimi found the net twice in Morocco’s 5-2 victory over Uganda, while find the net first as Houcine Ammouta’s men silenced Zambia in the last eight before scoring another double against the host nation in their 4-0 semi-final triumph.

In the final match played at the Stade Ahmadou Ahidjo, Yaounde, he was a marked man as second-half headers by Abdelmouna Boutouil and captain Ayoub El Kaabi helping them defeat Mali 2-0.

With that achievement, the Atlas Lions became the first country to win a second successive title in the tournament designed exclusively for home-based players.

Morocco would be hoping for a third title in a row when the seventh edition holds in Algeria in 2022.

The biennial football showpiece was billed to take place in April 2020, however, it was pushed forward after hosts Cameroon requested the rescheduling of the competition following the outbreak of Covid-19, which brought football activities to a stop.

Thu Feb 11 , 2021
Kerala Blasters have complicated their playoff chances after a draw with Odisha…. Kerala Blasters dropped points against bottom-placed Odisha in their 2020-21 Indian Super League (ISL) fixture on Thursday. While it is still mathematically possible for the Yellow Army to get to the playoffs, the draw has significantly complicated their […] 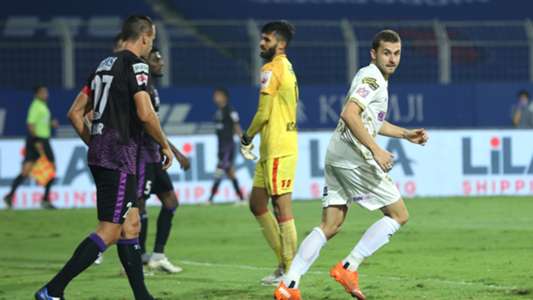