Terem Moffi continued with his tremendous goalscoring form in FC Lorient’s 2-2 draw at AS Monaco in Sunday’s Ligue 1 encounter.

The Nigerian striker now boasts eight goals in his last nine games for the Merlucciidaes in all competitions in the 2020-21 campaign.

Buoyed by their 2-1 defeat of Paris FC in a Coupe de France encounter on Tuesday – where Moffi was among the goalscorers, Christophe Pelissier’s men travelled to Stade Louis II to face title-chasing Monegasques.

With just seven minutes into the game, the visitors took the lead through Moffi who beat goalkeeper Benjamin Lecomte from the penalty spot. Referee Benoit Millot pointed to the spot after a goal-bound Yoane Wissa was hacked down by Lecomte.

Monaco came out attacking in their numbers, nevertheless, they were unable to level matters as the first-half ended a goal in favour of the visiting team.

Three minutes into the second half, the hosts levelled matters through Wissam Ben Yedder from a penalty after Djibril Sidibe’s fine corner kick spun and touched the arm of Houboulang Mendes. Despite goalkeeper Matthieu Dreyer guessing the right way, he could not stop the ensuing kick.

In the 62nd minute, Moffi put his side ahead – firing past the goalkeeper after dribbling past the hosts’ defenders.

The substitutions paid off with Yeddar ensuing that the game ended on a no winner, no vanquished note after profiting from an assist from Benoit Badiashile.

Moffi was in action from start to finish alongside Madagascar international Jeremy Morel, while Wissa who was handed a starter’s role was substituted for Jonathan Delaplace in the 78th minute.

For Monaco, Krepin Diatta was handed a place in the starting XI but he was replaced at half time by Stevan Jovetic.

Thanks to this result, Lorient occupy 17th position with 23 points from 24 games, while Monaco sit in the fourth spot with 49 points from 24 outings.

Sun Feb 14 , 2021
URA FC 0-1 Express FC: Red Eagles condemn their hosts to first loss of the season Express FC have moved fourth on the Ugandan Premier League table after a laboured 1-0 win over Uganda Revenue Authority (URA) FC in a game played at the Arena of Visions, Ndejje on Sunday.  […] 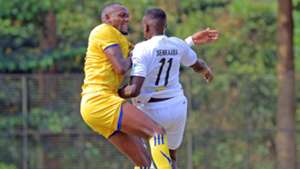