Lionel Messi netted his 650th career goal for Barcelona with a first-half free-kick in Sunday’s 2-1 win over Athletic Club.

Messi netted 20 minutes into the match at Camp Nou with a stunning set piece before the visitors answered back just after half-time through a Jordi Alba own goal.

Barca would find the winner with 15 minutes to play as Antoine Griezmann finished off a cross from Oscar Mingueza to seal victory.

Messi reached the 650-goal milestone for Barca on the same day the club threatened to take legal action against El Mundo after the newspaper published the details of his €555 million (£491m/$674m) contract.

650 – Lionel Messi 🇦🇷 has scored his 650th goal for @FCBarcelona in all competitions (456 in @LaLigaEN), 49 of them have been direct free-kick goals (38 in league). Celestial. pic.twitter.com/1lJTNCQJSp

The club legend was able to shift his focus to on-field matters by scoring his 49th direct free-kick for Barca, with 38 of those coming in La Liga.

Messi has now scored two direct free-kick goals from his last four attempts in all competitions, after netting just one from his previous 62 attempts.

Barcelona moved up to second place with Sunday’s win but they are still 10 points behind Diego Simeone’s high-flying Atletico Madrid side, who have also played one game fewer than the Blaugrana.

Catching Atletico will prove a major challenge in what could be Messi’s final season at Barca, as his contract enters its final six months.

Speaking to Movistar after the match, Griezmann saluted his team-mate, who has been key to his side winning five consecutive matches in La Liga.

“Messi is a legend, we are enjoying him, and hopefully he will keep helping us win,” the France international said.

Griezmann also had praise for his international team-mate Ousmane Dembele, who has overcome an injury earlier in the season to start five Liga games in a row for Barca.

“Dembele is playing very well,” Griezmann added. “We just want to get him in the best shape as possible so he can help us as much as possible.”

Barca face a Copa del Rey quarter-final against Granada on Wednesday before returning to Liga action against Real Betis next weekend.

Mon Feb 1 , 2021
Following his second-half strike against the Yellow and Reds, the Gambia international has now scored his maiden goal in the Italian top flight Ebrima Colley netted his first Serie A goal with a second-half header as Hellas Verona crumbled 3-1 to AS Roma at Stadio Olimpico, in the process ending […] 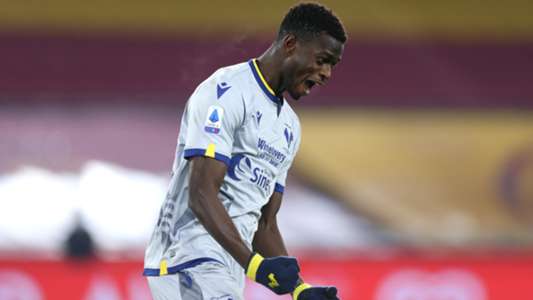