The 25-year-old has been confirmed on Tuesday night although the length of his contract was not revealed. The one-time Coupe du Trone champions have made a short statement announcing the arrival of the former Kariobangi Sharks attacker.

The move to the Morrocan side ends the Harambee Star’s brief stay in the Algerian top-tier team Jeunesse Sportive de Kabylie commonly referred to as JS Kabylie.

At his new team, the forward will replace Simon Msuva, who joined Wydad Casablanca in 2020.

Juma has often been on the move both in the Kenyan league and on foreign soil. The striker won the Golden Boot in 2017 while serving Football Kenya Federation Premier League side Kariobangi Sharks.

In June 2017, Juma trained with Swedish clubs AIK and Jonkopings Sodra, then with South African side Bidvest Wits in July, but he was signed by Cape Town City in January 2018.

On September 22, Juma signed for Dibba Al-Fujairah before he left to join Libyan champions Al-Nasr Benghazi but due to security concerns left in 2019 to sign for Algerian side JS Kabylie.

He made his senior international debut for Kenya in June 2017, when he was named in the starting XI of a 2019 Africa Cup of Nations qualifying match against Sierra Leone.

He earned his second cap during a friendly against Mauritania two months later, where he scored with a 58th-minute header.

Although his inclusion has often divided opinions, the former Bandari star was used during the Afcon qualifiers against Comoros – where he scored during a 1-1 draw in Nairobi, and when Kenya were defeated 2-1 in Moroni in November.

The centre-forward will be the latest Harambee Star to make a move abroad.

After a stellar season with Kashiwa Reysol in the J1 League, Michael Olunga – who won both the Golden Boot and the Most Valuable Player awards – moved to the United Arab Emirates where he joined Al-Duhail Sports Club.

Tue Feb 9 , 2021
Solskjaer will be pleased with his side’s performance so far, but they need to make a big improvement in front of goal after the break if they want to get something out of this match. As for West Ham, they struggled to get out of their half at times and […] 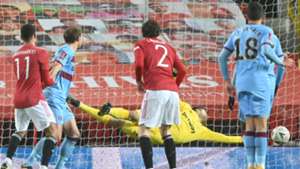