After scoring in Real Madrid’s 3-1 win over Eibar on Sunday, the Brazilian took a knee and raised his first in solidarity with the movement

Marcelo has urged others to use their platforms to instigate change after taking a knee in support of the Black Lives Matter movement following his goal against Eibar.

After scoring his team’s third goal in Madrid’s 3-1 win on Sunday, left-back Marcelo dropped to his knee and raised his right fist .

The idea of taking a knee was adopted by former San Francisco 49ers quarterback Colin Kaepernick in 2016 when the NFL player protested racial injustice and police brutality in the United States.

Kneeling has been prevalent at the protests that have followed the death of George Floyd in police custody in Minneapolis last month.

Borussia Dortmund and Hertha Berlin players all took a knee prior to their Bundesliga fixture earlier this month, a week after Borussia Monchengladbach forward Marcus Thuram knelt following his goal against Union Berlin.

LaLiga returned for the first time since the coronavirus-enforced break last week and, while revealing his happiness at being back playing, Marcelo also used lyrics from 2Pac’s song ‘Changes’ when addressing his celebration.

“Happy to be back with Real Madrid!” Marcelo wrote on Instagram alongside a picture of him kneeling.

“Happy to have scored a goal!

“But even happier to see all the CHANGES in the world! Now it’s time. We must use the power we have and start making real CHANGES.”

Marcelo then quoted 2Pac: “We can never go nowhere unless we share with each other. We gotta start makin’ changes.

“Learn to see me as a brother instead of two distant strangers. And that’s how it’s supposed to be…

“I’d love to go back to when we played as kids but things change, and that’s the way it is…”

Mon Jun 15 , 2020
NBA star Kevin Durant has purchased a stake in the Philadelphia Union, the club announced on Monday. The Brooklyn Nets forward has acquired a five percent ownership stake in the club, with the option to purchase an additional five percent stake in the near future. Durant, a 10-time NBA All-Star, is a two-time […] 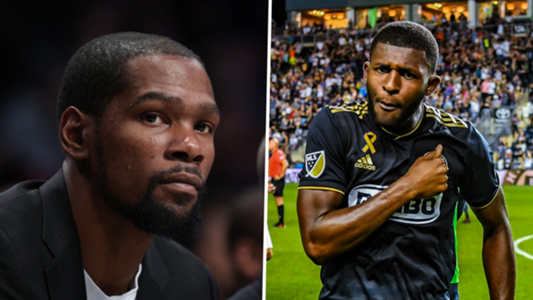