Joao Victor, Souvik Chakrabarti and Nikhil Poojari are ruled out of the game against Jamshedpur FC…

Hyderabad FC are fourth on the Indian Super League (ISL) and on Sunday, they will face Jamshedpur FC, who have suffered three consecutive defeats.

The Nizams too have picked a point each from their last two matches against Mumbai City FC and Odisha FC. Coach Manuel Marquez hoped that Nerijus Valskis doesn’t get back to his best form on Sunday after not scoring after not finding the back of the net in their last two outings.

“It will be a difficult game. They will try to win after losing three games. They have a coach (Owen Coyle) with lots of experience. They have got new players. It was our third match (when the two teams faced each other earlier in the season which ended in a 1-1 draw) back then. We had a short pre-season.

“For me, Valskis is one of the players who can score in different ways. He is a good free-kick taker.  It happens that you don’t score for two-three matches and then you score a hat-trick. Hope the day isn’t tomorrow,” said Marquez.

Hyderabad FC dominated the proceedings against Odisha FC in the first half and should have at least taken a three-goal lead. However, wastefulness in front of goal came to hurt them as Odisha bossed the second half and got the equaliser. In fact, they could have even clinched full points against a tired Hyderabad team, who were playing their second game in four days.

“It was one half for every team. We could have won the match 3-0 in the first half and could have conceded three goals in the second half. It was a fair result.

“You look at the scores of every day. You saw Mumbai City against East Bengal and even FC Goa and Kerala Blasters. They have all won in the last minute. The second leg is always very difficult as all teams are fighting to arrive in the top four.

“Odisha are last on the table but they will give a tough fight to BFC (Bengaluru FC). So, all matches are different and tough,” he opined.

Marquez pointed that teams with fewer injury concerns can be expected to perform better. It must be noted that Hyderabad have done considerably well to be in top four despite having several injury issues throughout the campaign.

“We don’t feel any pressure. The second half against Odisha was not good for us. It is very difficult to play amidst the pandemic. I respect the league. Many players are getting injured. The team with fewer injuries will have more options and can finish better. We played well against Mumbai and the first half against Odisha. It is part of the game,” he explained.

The former Las Palmas coach was asked to speak on Hyderabad’s chances to qualify for the play-offs and in response, he pointed that his team have played an attacking brand of football and backed the claim with statistics.

“We have to play eight games, we will fight till the end. In January, we have played four games, two wins, two draws. The goalkeeper and the post have also come into action. Hali (Halicharan Narzary) struck the post in the previous match. We have played good football. We are creating chances. It isn’t normal to score eight goals in two matches. But these kinds of things are normal, scoring one or two, maybe you don’t score in some,” he elaborated.

The likes of Akash Mishra, Asish Rai, Hitesh Sharma, Mohammad Yasir and Liston Colaco have excelled for Hyderabad. Marquez reasoned that for young players to develop, they need competitive game-time – which is the only way to improve.

“I watch them in every training session. I know their potential and quality. We are happy with them. This season has been fantastic. Many players are playing first time in the ISL. The young players if you want them to improve, they have to play. They are showing their level regularly. They are playing very good and we are happy.

“Hali (Narzary) is not worrying about the defensive part. In modern football, you have to do both. But now he is closer to the goal than he was at the beginning. He is a very good player,” said Marquez.

Adil Khan parted ways with the club to join FC Goa and Marquez only had good things to speak about the former Churchill Brothers player.

“Adil was the real captain of this team. He is one of the players who is very professional. He has a very good attitude. If he doesn’t play, then he doesn’t have the option to go to the national team. I hope he plays in Goa and has a shot at the national team. I was happy to train him. I had a good relationship with Adil,” he mentioned.

Sat Jan 23 , 2021
Goal can exclusively reveal the four players who should have missed the away match staged in Moroni owing to Covid-19 Kenya international Victor Wanyama is among the four players Comoros Football Federation claimed had tested positive for Covid-19 before their Africa Cup of Nations qualifier. During the game played in Moroni […] 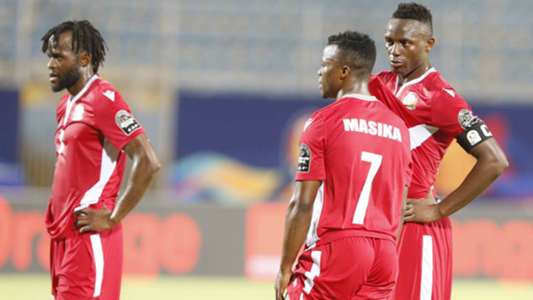