Solskjaer will be pleased with his side’s performance so far, but they need to make a big improvement in front of goal after the break if they want to get something out of this match. As for West Ham, they struggled to get out of their half at times and Moyes will want them to get on the front foot more in the second half and create some chances.

It’s goalless at the break between Manchester United and West Ham. The hosts dominated possession in the first half, but only created one real clear cut chance when Lindelof forced Fabianski into a good save from a corner. West Ham have defended really well so far, making a lot of important blocks to deny United, but haven’t really created anything at the other end.

45′ + 2′ Yarmolenko whips a cross in from the left and Soucek chests it down for Fornals, who tries to hit the shot first time. He scuffs it though and it’s an easy clearance for Maguire.

45′ Matic chips the ball over the defenders to pick out Van de Beek’s run and he touches it down for Martial. His shot is blocked as the offside flag goes up against the Dutchman.

43′ West Ham are just starting to push forward a bit more now, with Bowen playing it out to Soucek who is making a run down the right. He’s tracked all the way by Matic though and he can’t reach it.

41′ Lindelof spots Rashford’s run through the middle and the defender plays a ball over the top for him. It’s good defending by Coufal though as he stays with him the whole way and helps see it back to Fabianski.

39′ Martial is the first back to his feet and he’s slowly making his way to the side of the pitch. Diop is up a couple of seconds later and they both look like they’re going to be able to carry on.

37′ Martial cleared a corner before being caught by Diop who was running onto the ball. Both players have stayed down and are receiving treatment for their head injuries now.

35′ It’s a great run by Rashford to get into the box only to lose out to Dawson as he sets himself for a shot. Martial picks up the loose ball but can’t find any space and he’s forced to go backwards by Rice.

33′ It’s a quick break from West Ham as Yarmolenko wins it back in midfield and plays in Bowen through the middle. He’s quickly closed down by Telles though and can’t keep hold of the ball.

31′ United are still finding a lot of space down the left as Rashford drives into the final third. He squares it to Van de Beek and Diop blocks it, but his clearance comes back to Telles, only for Dawson to get in the way of his cross.

29′ Telles drills a low cross into the box from the left this time and he picks out Van de Beek in the middle. He flicks it towards the near bottom corner, but Rice is back to make the block and send it over the bar.

27′ GREAT SAVE! It’s a great corner from Telles as he whips the ball into the middle and picks out Lindelof. He nods it down and it takes a deflection off Dawson, but Fabianski gets across quickly to tip it onto the post.

26′ Martial plays a one-two with Rashford on the edge of the box to get away from Rice and he hits the shot first time when he gets the return pass. Yet again though, a West Ham player is there as Noble throws himself in front of it.

24′ West Ham are still struggling to get out of their own half as United switch play out to Rashford on the left. His first touch gifts the ball to Coufal, but he puts it straight out of play before he can break forward.

22′ Rashford cuts inside for the left and he decides to have a shot himself despite having support in the box. He tries to curl it towards the far post, but Dawson is there to make another block for West Ham.

20′ United are still dominating possession here and a pocket of space just opens up for Matic on the edge of the box. He decides to have a go from range but fires his shot high over the bar and into the stands.

18′ Aged 23 years and 101 days, Rashford tonight becomes the fourth-youngest player in Manchester United’s history to make 250 appearances for the club, behind only Norman Whiteside, George Best and Ryan Giggs.

16′ West Ham are finally able to make that change as Diop comes on for the injured Ogbonna.

15′ West Ham are currently playing with 10 men as Ogbonna isn’t able to come back on and they’re on the attack. Cresswell squares it to Yarmolenko, who turns past Lindelof to get a shot away, but it’s blocked by the defender.

13′ Ogbonna just got caught on his ankle when he made the block on Martial’s shot and he looks to be in a bit of pain as he receives some treatment. The stretcher is brought on, but the defender is back on his feet to limp off the pitch.

11′ CHANCE! Telles plays a one-two with Rashford to open up space before playing a throughball in behind the defence. Martial runs onto it and hits his shot on goal but Ogbonna gets back to make an important block to deny him.

10′ Wan-Bissaka has space to run into down the right and he whips a good cross into the box and Greenwood flicks it on in the middle to pick out Rashford. He takes too long to decide what he wants to do though and Noble dispossesses him.

8′ West Ham are being kept penned back in their own half as United continue to close them down high up the field. The visitors are keeping the ball well, but they just can’t find a way forward at the moment.

6′ It’s a good ball from Telles over the top to pick out Rashford’s run ahead of him down the left and he brings it down well. He’s quickly closed down by Coufal though and he can’t keep it in play.

4′ Greenwood closes Fornals down quickly to win the ball back and he drives forward into the box. He takes a heavy touch when he gets into the area though which gives Cresswell chance to clear the danger.

2′ West Ham have a free-kick in midfield and Noble curls a good ball into the far post. He’s looking for Yarmolenko, but Matic gets ahead of him and does enough to help see it out and avoid giving away a corner.

1′ Noble gets the game underway for West Ham!

David Moyes makes just three changes to his team after their draw with Fulham last time out. Noble, Fornals and Yarmolenko start, as does Soucek after his red card from that game was rescinded. Benrahma is named on the bench, while Jesse Lingard is ineligible to face his parent club.

Ole Gunnar Solskjaer makes six changes to the side that drew with Everton at the weekend as he brings in Henderson, Telles, Matic, Fred, Van de Beek and Martial. Shaw, McTominay, Fernandes and Cavani drop to the bench, where new signing Diallo is also named as a substitute.

United saw off rivals Liverpool with a 3-2 win in the fourth round. They come into this game having lost just one of their last nine in all competitions (W5 D3), and did beat today’s opponents 3-1 in the Premier League earlier this season. As for West Ham, they cruised past Doncaster Rovers with a 4-0 win last time out in the competition and also come into today on a good run, losing just one of their last 11 fixtures (W7 D3).

Hello and welcome to live coverage of the FA Cup fifth-round meeting between Manchester United and West Ham at Old Trafford!

'Kgatlana is the benchmark player for us' - Eibar coach Dorronsoro

Tue Feb 9 , 2021
The Gunsmiths’ manager stressed the impact of the South African striker and feels proud to have her on his team Eibar coach Iker Dorronsoro has lauded Thembi Kgatlana for her contribution, describing her as the benchmark for the Gunsmiths.  Kgatlana joined the Spanish outfit from Portuguese Liga BPI side SL Benfica […] 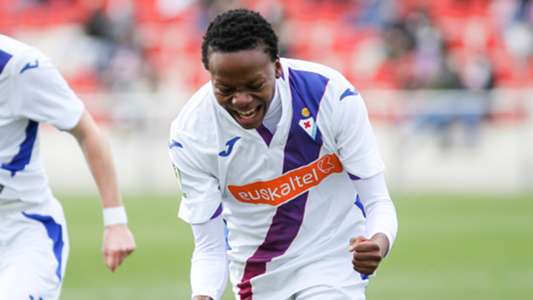