In-form defender John Stones scored his first Manchester City goal since November 2017 to put his side in another EFL Cup final.

Stones has been outstanding at the heart of the City defence since forcing his way back into the side this season and he scored his first City goal in 1,162 days at Old Trafford on Wednesday.

The in-form centre-back had earlier put the ball in his own net early on but Marcus Rashford was offside, summing up how his fortunes have changed.

United were unable to respond following Stones’ goal early in the second half and Fernandinho doubled City’s lead seven minutes from time with an excellent finish.

Pep Guardiola’s side were worthy winners, dumping their neighbours out at the same stage they did 12 months ago as they aim to win the competition for a fourth consecutive season.

Wed Jan 6 , 2021
Milan 1-3 Juventus: Chiesa at the double as champions go fourth Federico Chiesa made it three goals in two Serie A games but went off injured as Juventus beat Milan. Federico Chiesa scored a brilliant brace as Juventus ended Milan’s unbeaten start to the season and clinched a crucial 3-1 […] 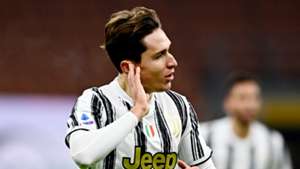