Manchester United haven’t got a “champion mentality” according to Gary Neville, who has described Ole Gunnar Solskjaer’s Red Devils as an “odd bunch”.

Solskjaer’s side were touted as genuine title contenders after the 1-0 win away at Burnley, and they followed up that result by knocking Liverpool out of the FA Cup in impressive fashion.

The Manchester outfit then picked up a 2-1 win at Fulham to move two points clear at the top of the league, but a surprise home defeat against Sheffield United last week saw them crash back down to earth.

City, meanwhile, picked up back-to-back wins over West Brom and the Blades to open up a four-point lead in first place with a game in hand, and United missed the chance to make up significant ground after being held to a 0-0 draw by Arsenal at Emirates Stadium on Sunday.

Neville feels his old club are not quite ready to win the Premier League trophy under Solskjaer, with a lack of “belief” preventing them from taking that final step.

“I think it’s a disappointment over the three games – Liverpool, Sheffield United and Arsenal – the fact that there’s two points out of those three matches,” the former Red Devils defender said on his Sky Sports podcast.

“The Liverpool and Arsenal games they were there for the taking and I had this debate, I saw Roy (Keane) and Jamie (Redknapp)’s piece last night, why didn’t you show more belief?

Neville added: “I get the bit where you would say ‘okay, you’re there, go for it, take it, it’s a strange season’, but they just haven’t got it. We didn’t think that ten weeks ago, we didn’t think it ten days ago. When we’re seeing them in games not quite going for it it’s disappointing, and I share that disappointment but it’s not surprising.

“It’s not surprising to any of us because we didn’t think they could do it, so when they don’t do it, let’s not be shocked.

“It’s just disappointing that they’re not quite there yet, but I accept it that they’re not quite there. I wanted at the start of the season as a Manchester United fan for them to get close to Liverpool and City. If you could say to me in another two to three months they’d be sat between Liverpool and City I’d be absolutely delighted, because that is big progression.”

Asked why United have been unable to maintain their previously impressive form, the treble winner responded: “They’ve been masses of points off them in the last two or three years, they’ve been nowhere near.

“It’s just odd. You see patterns of teams develop but there are very few patterns with Manchester United and maybe that’s because they do rotate more. Ole Gunnar Solskjaer seems to rotate four or five times in midweek and then changes again at the weekend, and maybe that consistency just isn’t quite there.”

Mon Feb 1 , 2021
The Norwegian midfielder made his debut for the Gunners off the bench against Manchester United after his January switch from Santiago Bernabeu Sol Campbell says Martin Odegaard has a “long road” ahead of him at Arsenal, with the Real Madrid loanee needing to show Mikel Arteta his ability can be put to […] 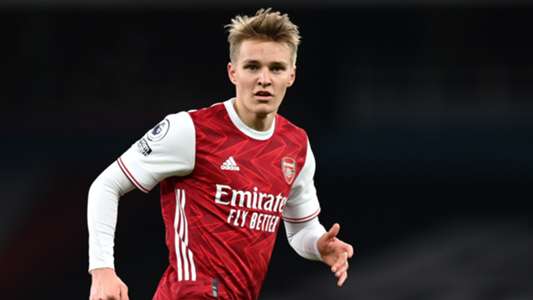