Edinson Cavani has made a positive impression on many of his team-mates at Manchester United, with back-up goalkeeper Lee Grant admitting the Uruguayan has always been his “No 1 target on Championship Manager”.

Ole Gunnar Solskjaer is in a position where transfer dreams can be made reality, and the Norwegian coach moved for the experienced frontman during the summer of 2020.

That show of faith has been richly rewarded, with Cavani playing an important role on and off the field for the Red Devils.

Grant told United’s ‘Unscripted’ series: “Edinson is somebody who I’ve always loved to watch, long before he came to United. He was always my No 1 target on Championship Manager back when I had the time (days which are behind me now with four children) and he is a real pleasure to play with.

“As much as it pains me to say as a goalkeeper, it’s a real pleasure to watch him ply his trade.

“He has a way with his movement and his first touch of setting things up in such a way that he’s almost guaranteed a goal as an end product because of the position he’s taken up, the run he’s made, the touch he’s given himself. He always gives himself a really high percentage chance to score at the end of that.

“Some of his finishes as a result of training can look so natural, but it’s all down to preparation. He has this uncanny knack of repeating, repeating, repeating, and that’s a real skill in itself, the dedication he has to finish with such care and attention to detail. I think certainly our younger lads are all benefiting from being around somebody who is so meticulous about his work.”

The South American linked up with United after a record-setting spell at Paris Saint-Germain – one that saw him become the French club’s all-time leading goalscorer.

He was eased into the fold at Old Trafford by Solskjaer  but has seen regular game time over recent weeks.

Cavani is now up to 24 appearances for the Red Devils, with seven goals and two assists.

Cavani’s predatory instincts are being put to good use by United, with questions having been asked for time as to the ability of Anthony Martial to be a leading No 9.

He was, however, only tied to an initial one-year contract upon his arrival in England.

The expectation is that a 12-month extension option in that deal will be taken up, but United are yet to make any official announcement regarding a prolonged stay at Old Trafford.

Mon Feb 15 , 2021
The Reds skipper was left bemused by suggestions of a bust-up between team mates after the 3-1 defeat at Leicester on Saturday Jordan Henderson has laughed off suggestions of a dressing room bust-up between Alisson Becker and Andy Robertson after Liverpool’s defeat at Leicester on Saturday. It has been a weekend […] 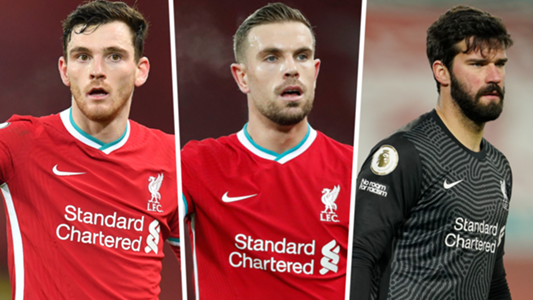