Riyad Mahrez continued his remarkable Premier League run against West Bromwich Albion with a goal and an assist during Tuesday’s game.

Riyad Mahrez has been directly involved in nine goals in eight Premier League games vs West Brom (5 goals, 4 assists) – only against Watford (10) has he registered more goal involvements in the competition. pic.twitter.com/EuF6KLdvj3

The Algeria international accentuated his importance to Pep Guardiola’s team by helping the Citizens silence the Baggies 5-0 at the Hawthorns.

Having won their last ten games across all competitions in the 2020-21 campaign, the Etihad Stadium giants faced Sam Allardyce’s men, who were hoping to bounce back from their 2-1 defeat to West Ham United their last time out.

City raced to take the lead in the sixth minute through Ikay Gundogan, who received a cross from Joao Cancelo from the right, took a touch on the edge of the box before rifling past goalkeeper Sam Johnstone.

While the hosts were aiming to launch a comeback, the visitors doubled their lead in the 20th minute courtesy of Cancelo.

Bernardo Silva darted onto the ball down the right and cut back for the Portuguese defender, who dinked it home for his first strike in the English elite division, before Gundogan got his second of the night ten minutes later.

In a goal-laden first half, Mahrez gave Guardiola’s men a four-goal advantage on the stroke of half-time after he was picked out by Raheem Sterling.

With that, the former Leicester City man has now been directly involved in nine goals in eight league fixtures against West Brom. He has only registered more goal involvements in the competition against Watford (ten).

Some 12 minutes into the second-half, City completed a routine win after Mahrez turned provider for England international Sterling.

Thanks to his commanding performance, the 2019 Africa Cup of Nations winner – who now boasts of five goals in 14 league games so far – was on parade from start to finish.

On the other hand, Nigeria international Semi Ajayi saw every minute of action, albeit, he could do little to prevent Allardyce’s side from obliteration.

Manchester City’s result takes them a point above Manchester United on the log having accrued 41 points from 19 games.

They continue their quest for the English top-flight diadem when they face relegation-threatened Sheffield United this weekend.

Naushad Moosa on ISL play-offs: It is open for everyone, NorthEast have got two wins in a row

Wed Jan 27 , 2021
Moosa believes that Bengaluru FC are very much in the mix for a berth in the ISL play-offs… Bengaluru FC interim coach Naushad Moosa stated that it is vital to give opportunities to young players to get a taste of topflight professional football. He maintained that while they are in […] 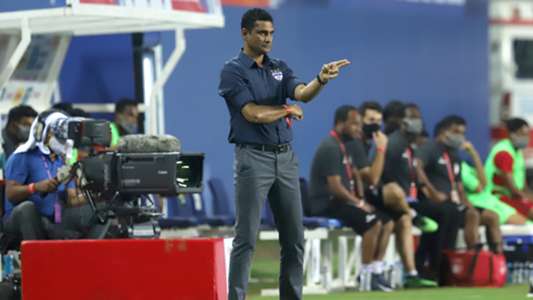