It was a night to forget for David Luiz as Arsenal returned to Premier League with a limp 3-0 defeat at Manchester City.

Raheem Sterling, Kevin De Bruyne and Phil Foden were on target as Manchester City impressed on their Premier League restart with a convincing 3-0 win over 10-man Arsenal at a wet Etihad Stadium.

It was an unhappy return for former City assistant and now Arsenal boss Mikel Arteta, whose positive test for coronavirus led to the postponement of this fixture and decisively moved the Premier League towards suspension in March.

Perhaps it was the three-month hiatus that accounted for David Luiz’s forgettable evening, his woeful misjudgement allowing Sterling to score his first goal of 2020 just before the break.

City’s only worry was when Eric Garcia was taken away on a stretcher after an ugly collision with team-mate Ederson, before Foden rounded out the win in the first of 11 additional minutes.

After a minute’s silence was observed, players from both sides took a knee in solidarity with the Black Lives Matter movement shortly before kick-off.

Bernd Leno tipped a 20-yard De Bruyne free-kick over the top in a pedestrian opening in which Arsenal lost Granit Xhaka and Pablo Mari to injury, with the hapless David Luiz replacing the latter.

City found their groove, though, and Sterling cut in from the left to test Leno, who brilliantly denied David Silva after another slick move by the hosts.

Sterling was then guilty of wastefulness when trying to scoop a close-range effort over Leno as Arsenal’s defence became stretched.

But it was third time lucky for Sterling on the stroke of half-time. David Luiz made a complete hash of De Bruyne’s throughball and the England forward rifled across Leno on the half-volley.

David Luiz’s nightmare continued in the second half when he dragged down Riyad Mahrez and was shown a straight red.

Leno also denied De Bruyne and Ilkay Gundogan before there was a sour note to proceedings when Garcia was hurt after being accidentally clattered by his own goalkeeper.

What does it mean? City make a statement on return

Though this result means Jurgen Klopp’s men cannot clinch it at Everton on Sunday, the Premier League title is heading to Liverpool. Guardiola knows that, City know that, but they still remain in the hunt for an EFL Cup, FA Cup and Champions League treble and on this evidence you should not discount that possibility.

For Arsenal, who had won their past three and not lost the previous six in the top flight prior to football’s suspension, the damage to their already slim Champions League qualification hopes may now be irrevocable. The Gunners are eight points adrift of fourth-placed Chelsea with nine games to go.

Sterling a menace as De Bruyne and Silva pull the strings

It took a little while for City to click through the gears but when they did was it a timely reminder of what we have missed these past three months.

Sterling was a regular threat to a disjointed Arsenal defence, who were admittedly not helped by the early losses of Xhaka and Mari, while De Bruyne and Silva were the architects of a wonderfully well-oiled midfield.

Leno was brilliant for Arsenal and was the main reason for the Gunners holding their own until the German goalkeeper’s fine work counted for nought thanks to David Luiz’s costly error with the half-time whistle looming. More flat-footed, shoddy defending led to him giving away the penalty and earning the red that left Arsenal no way back into the game.

David Luiz has now conceded penalties away at Liverpool, Chelsea and City this season, while he was also dismissed at Stamford Bridge.

City are back at the Etihad Stadium on Monday when Burnley head to Manchester. Arsenal are on the road once again when they visit Brighton and Hove Albion on Saturday.

Wed Jun 17 , 2020
Coppa Italia Final Went to a penalty shoot-out Gennaro Gattuso reaped the rewards of his good work with Napoli on Wednesday evening as they beat Juventus on penalties to be crowned Coppa Italia champions after playing out a scoreless draw. The 90 minutes were relatively evenly contested as far as possession […] 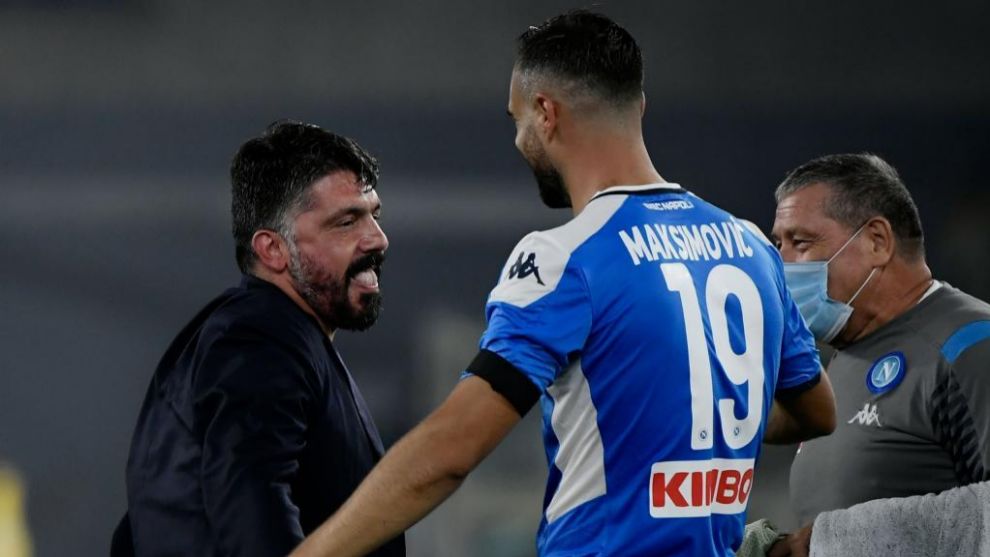