The likes of Manchester United and Liverpool will be on alert after Napoli boss Gennaro Gattuso admitted some of his players will leave this summer.

Gattuso has admitted that he only expects to retain the services of 70-80 per cent in the upcoming transfer window. With several of his top stars linked with moves to England.

Dries Mertens recently pledged his future to the Serie A giants, putting an end to speculation that the forward might join Chelsea or Inter Milan.

However, the likes of centre-back Kalidou Koulibaly, striker Arkadiusz Milik, winger Hirving Lozano and midfielder Allan have all been subject to exit talk.

And Gattuso admits that he doesn’t expect to retain the services of everyone currently at his disposal.

“We don’t need to operate too much in the market,” Gattuso told the press, as cited by Goal, after his side beat Juventus on penalties to lift the Coppa Italia.

“We have to see who’s going to leave us. Our chairman knows it – we speak about it every week. This is a strong team but I think that only 70-80% of the players will stay with us.

“We will do a few transfers but I know this team has great quality [already].”

Koulibaly has been linked with United and Liverpool over the past two seasons. Milik, meanwhile, is rumoured to be a major target for north London rivals Tottenham and Arsenal.

Lozano and Allan are also said to be on Everton’s radar, having worked under Carlo Ancelotti during his time in charge in Naples.

However, whether or not Napoli chose to cash in on their top stars or sell fringe players instead remains to be seen at this stage.

Meanwhile, Premier League clubs will have to pay €45m if they want to sign defensive target Eduardo Quaresma, after he agreed a new deal with Sporting CP.

Quaresma has emerged as one of the Lisbon side’s most promising academy players. The centre-back made his first team debut in Sporting’s first game back from the three-month break in the Primeira Liga.

Quaresma must have done something right, as he retained his place for Sporting’s next game. Lasting the full 90 minutes, he helped them keep a clean sheet against Pacos Ferreira.

According to Jornal De Noticias (via Sport Witness), several Premier League clubs have now been alerted to Quaresma’s potential, including, United, Liverpool and Chelsea. Read more…

Simy's mind only fixed on Serie A promotion with Crotone

Thu Jun 18 , 2020
The Pythagoreans are poised to return to the Italian top-flight based on their current position on the Serie B table Crotone forward Simy Nwankwo has asserted he only has his mind fixed on Serie A promotion as Serie B action has finally kicked off after three months of suspension because […] 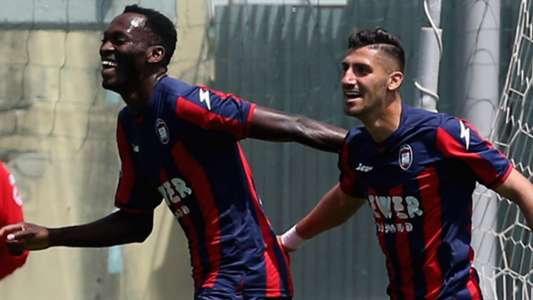