With the match level in the second half, United were awarded a spot-kick only to have it taken away after Craig Pawson went to the monitor

Maguire went down midway through the second half under a challenge from Semi Ajayi, with Pawson pointing to the spot to award United a penalty.

But after a VAR review of the incident on a free kick, Pawson ruled that Ajayi didn’t make sufficient contact for Maguire to go to ground.

Editors’ Picks
What Maguire said about the decision

“We created a lot of chances – enough to win the game,” Maguire told Sky Sports. “It was tough for ourselves with the goal we conceded – for us it was a foul.

“We played the game in their half. We can do more and improve but it’s disappointing. It was a tough job against a team that defends deep. In the second half we played with a great tempo.

“I was so certain it was a penalty. I don’t understand why he’s been sent to check it.

“I’m goalside of the defender, I feel a touch on my shoulder, he’s pulling me back, and then I feel a clip on my heels as well. It was minimal, but it’s a penalty, especially after the referee points to the spot you think there’s no chance it’s getting overturned.

“I was so confident it was going to be given, but it seems like the decisions at the moment are going against us. We can’t be relying on VAR though, we huffed and puffed and have to improve.”

What the pundits said

On Sky Sports after the game, both Graeme Souness and Gary Neville agreed that Maguire went down too easily for the incident to have been a foul, with the latter pointing out the defender may have been offside anyway.

“He goes to ground as though he’s been hit with a baseball bat,” Souness said. “If he said he thinks it’s a penalty, it’s not enough to bring him down the way he goes down.

Neville added: “The strange thing is they didn’t look at the offside to start with, Maguire’s not complaining too much.

“He’s got it right, he just goes down off that hand off the shoulder, it’s not enough to make Maguire fall.”

What West Brom said about the decision

“The confusing thing is Harry Maguire is offside before it,” head coach Sam Allardyce told Sky Sports. “What should have been the decision is that this is offside so let’s play on. I’m massively confused.

“If he gave the penalty and that was the winner then that would have been an absolute injustice.”

Defender Kyle Bartley added: “It didn’t look a foul in real time. I’m not a massive fan of VAR personally but today it’s gone in our favour.”

Another poor result for Man Utd

Mbaye Diagne opened the scoring for the Baggies in the second minute and Bruno Fernandes equalised before half-time with a spectacular volley.

But United could not find a winner and the draw at The Hawthorns represented the team’s third in their past four Premier League matches.

Overall, United have won just one in five league games, falling seven points behind league-leading Manchester City, who also have a game in hand. 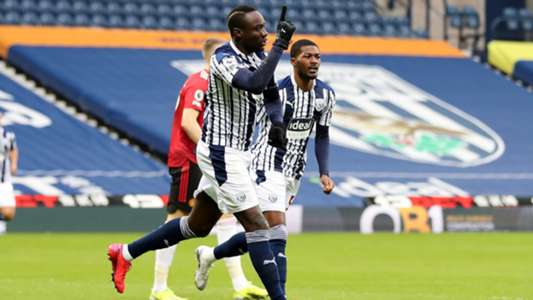