Mahrez scored on either side of half-time in the semi-final second leg, with his second goal seeing City pull three goals clear on aggregate and all but seal the tie.

As the clock ticked down and with the tie out of reach PSG made a series of harsh challenges, with Angel Di Maria sent off for kicking out at Fernandinho.

“It was a very good game. We didn’t start well again – we didn’t have a good first half but we got the goal and we were more comfortable,” Mahrez told BT Sport.

“We played well second half and we could have scored more. They lost their nerve and started to kick us and after the red card it was more comfortable.”

Mahrez’s opener came after a brilliant long ball from Ederson started City’s move. On the goal, the Algerian said: “Of course Ederson’s long pass was planned. We know he is capable of putting the ball in the other goal and we work it all the time and today it worked.”

With their 4-1 aggregate victory, City have now reached the first Champions League final in their history.

Having already clinched the Carabao Cup, Pep Guardiola’s men can also win the Premier League title should they defeat Chelsea on Saturday.

With two trophies all but secure, City will be aiming for a treble in the Champions League final when they face either Chelsea or Real Madrid on May 29.

“Everybody has to be solid defensively and that’s why we [reached the final],” Mahrez added.

“We didn’t concede much and I think that’s why we’re in the final. It’s good. We have another game on Saturday. We need to win to be league champions and then we’ll concentrate on the Champions League final.”

Tue May 4 , 2021
The Citizens’ head coach ended a decade without reaching the European decider with a fine victory at the expense of PSG Pep Guardiola was delighted with how his Manchester City side progressed to their first-ever Champions League final on Tuesday – and now hopes fate smiles on him and his […] 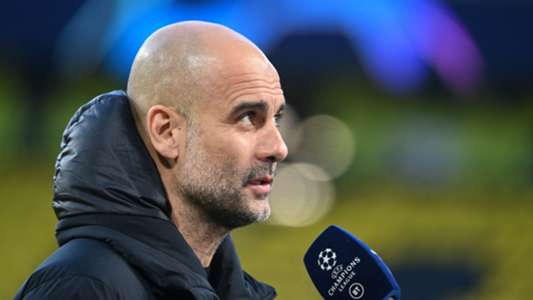