Manchester City boss Pep Guardiola warned that there is still more to come from his charges as they wrapped up a 13th consecutive win in all competitions on Wednesday at the expense of Burnley.

While the scoreline may not have been quite emphatic as neighbours Manchester United’s 9-0 thrashing of Southampton the previous evening, City’s win never looked in doubt at Turf Moor.

Gabriel Jesus gave the visitors the lead within three minutes to set Guardiola’s men off to a perfect start, with Raheem Sterling adding the second and, as it proved, final strike of the game shortly before half-time.

The 2-0 victory was City’s ninth straight Premier League win, a run which has seen them push ahead of their title rivals in recent weeks to open up a three-point lead over United having played one game fewer.

But if the club’s fellow title challengers were hoping they would soon let their foot off the gas, Guardiola advised they think again.

“Can we improve? A lot. Today we lost some simple balls, that is the only thing I am concerned about,” the former Barcelona and Bayern Munich coach told reporters after the final whistle.

“I am asking them to do effort and the simple things well, we are trying. Today more than usual we lose simple balls, but in general I am satisfied, because we continue to be solid and create enough chances.

“Knowing that coming here, against Burnley away, it is always difficult. Today we did it again really well. We can do better, but in general I don’t have regrets. The players are human beings and are fantastic.

“It’s always a good result here, Burnley away. So everyone knows how difficult it is, and we didn’t concede many chances again and created clear chances to score. I am satisfied.”

City return to action on Sunday, when they face fourth-placed Liverpool at Anfield.

Wed Feb 3 , 2021
The Senegalese teenage sensation bagged his first career hat-trick as Philippe Clement’s secured an emphatic win on Wednesday Youssouph Badji scored three goals in Club Brugge’s 6-1 victory over third division club Olsa Brakel in the Belgian Cup round of 32. The 19-year-old doubled the Blue-Black’s lead in the 21st […] 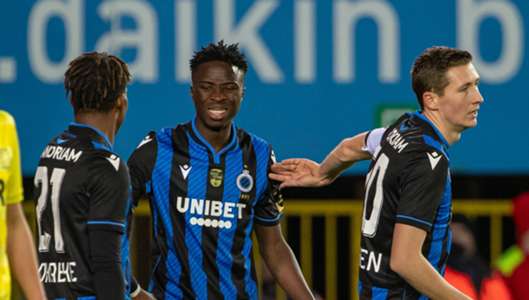