Mamelodi Sundowns have an opportunity to open a five-point gap at the top of the Premier Soccer League standings when they welcome Chippa United at Loftus Versfeld on Sunday.

After watching their closest rivals SuperSport United and Swallows FC drop points on Saturday, victory for Downs will extend their advantage at the top.

They will, however, would have played a game more than Matsatsantsa and the Dube Birds but still, breaking clear of their chasers is what would be on their mind on Sunday when they come up against an improved Chippa United outfit.

Although placed 13th on the table, the Port Elizabeth side have had a decent run under Dan Malesela, losing just once in their last five games he has been in charge as they try to move away from the relegation zone.

A win for the Chilli Boys would lift them up to ninth spot while they will remain on their current position in case of a draw of defeat.

The midfielder-cum-defender was shown a red card in their 2-1 win away at Black Leopards last Wednesday.

With Mvala recently being converted into a centre-back due to the unavailability of Ricardo Nascimento, Brian Onyango, Rivaldo Coetzee and Bangaly Soumahoro, Downs have not updated if any of those defenders are back.

If none has returned from the “injury or illness” crisis the team is facing, Sundowns could immediately throw into the fray new signing Rushine De Reuck, whose arrival at Chloorkop was officially announced on Saturday.

Chippa United have not announced the medical or injury situation in their camp.

But coach Malesela would be hoping that his side’s top performers like captain Chidi Kwem, fellow forward Bienvenu Eva Nga and defender Riaan Hanamub are available.

Sundowns will be playing their 15th PSL match of the season while it is game 14 for the Chilli Boys and both sides go into Sunday’s contest on the backdrop of victories.

For Downs, they recovered from a three-game winless run following a 2-1 win away at Black Leopards last Wednesday.

That they are back on track might spur them on against the Chilli Boys whose last game was a 3-0 victory over Leopards the previous weekend.

Chippa have, however, proven that they are no push-overs in recent games, having managed to avoid defeat in four of their last five matches in which they have recorded two wins, as many draws and a loss.

That run includes two victories and a draw in their last three outings which would make them arrive at Loftus Versfeld in high spirits.

This translates to a significant improvement under Malesela, who took over the coaching reins late December 2020 on the backdrop of five successive winless matches consisting of four defeats and a draw.

But the former Orlando Pirates and Sundowns star has led them to a much-improved campaign, guiding them out of the relegation zone.

A tight Sundowns defence which has conceded just seven goals in 14 league games, the lowest in the campaign so far, will now be put to a stern test by a vastly improved Chippa attack which has scored seven goals in the last five games.

The last PSL match between these two sides saw Masandawana convincingly winning 3-0 at home in February 2020.

Wandera happy to regain starting role at Tusker after injury

Sun Jan 31 , 2021
The Brewers left-back is happy to return to the team after suffering an injury during pre-season and missing their opening matches Tusker defender Hillary Wandera has explained the pain of picking up an injury in pre-season which forced him to miss the start of the 2020-21 FKF Premier League campaign. […] 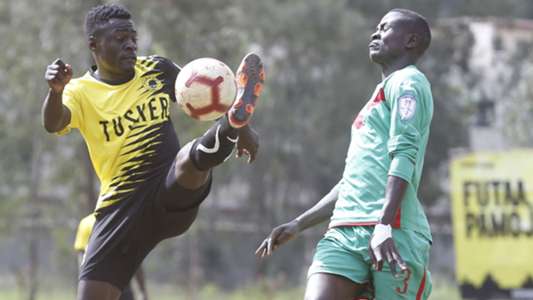