Mamelodi Sundowns secured their fourth consecutive win across all competitions when they defeated Al Hilal Omdurman 2-0 in the Caf Champions League Group B game on Saturday evening.

Mosa Lebusa scored his first goal of the season when he broke the deadlock in the first-half to hand Masandawana the lead, before Kermit Erasmus ended his three-match goal drought by scoring in the last minute.

Masandawana were looking to extend their 20-match unbeaten run at home in the Champions League having edged Stellenbosch FC 3-2 in their last game which was the Nedbank Cup clash last week.

Denis Onyango and Mothobi Mvala were recalled to the starting line-up as Sundowns head coach Manqoba Mngqithi made two changes to the team which took on Stellies at home.

On the other hand, the Blue Wave were banking on their six-match unbeaten run in the Champions League and they had thrashed Al Ahli Khartoum 3-0 in the Sudanese Premier League game on Monday.

Experienced forward Mohamed Abdel Raman led the attack for coach Zoran Manojlovic’s side, while Ivorian defender Mohamed Ouattara was deployed in the defence and former Sudan under-20 goalkeeper Mohamed Abooja started in goal.

Sundowns were typically quickly out of the blocks with Themba Zwane forcing Abooja into a fine diving save after Lebohang Maboe’s cross had flashed across the face of goal narrowly missing the target.

Abooja was beaten in the 10th minute when Mosa Lebusa’s bullet header hit the back of the net to make it 1-0 to Sundowns after connecting with a delightful cross from Lyle Lakay.

Masandawana were hungry for goals as Siphelele Mkhulise’s attempt was brilliantly pushed away by Abooja after a quick move involving Zwane and Peter Shalulile.

Zwane was keeping the Blue Wave’s defence busy with dribbling skills and movement and one of his passes sent Mkhulise through on goal, but the attacking midfielder’s effort was cleared off the goal-line.

The Blue Wave started defending much better after the half-hour mark with Ouattara and his central defence partner Mohamed Saeed Ahmed making some crucial interceptions and clearances.

Al Hilal were able to contain the hosts until Egyptian match referee Ghead Grisha blew the half-time whistle and Sundowns were leading 1-0 at the interval.

The visitors threatened first after the restart as goalkeeper Onyango produced a superb save to deny Ibrahima Ndiaye from a free-kick as the two-time Champions League runners-up looked to level matters.

Onyango then came out rushing to deny Raman from a one-on-one situation after the former CA Bordj Bou Arreridj striker was sent through on goal with the Masandawana defence exposed.

The Sundowns technical team reacted by introducing attackers Kermit Erasmus and Lesedi Kapinga in the 65th minute as the hosts searched for their second goal of the match.

Abooja produced two great saves to deny Masandawana’s free-kick specialist Lakay after the hosts were awarded two free-kicks in the latter stages of the encounter.

The last chance of the game fell for Erasmus in the 90th minute and the experienced player made no mistake as he calmly slotted past Abooja to seal a 2-0 victory to Sundowns with Shalulile providing the assist.

The win saw Masandawana start their Group B campaign with a victory and their next match is against Baroka FC in a PSL encounter on February 17.

Sat Feb 13 , 2021
The highly rated 19-year-old claims to be fully fit, with the Brazilian youngster eager to compete with his captain for minutes under Mikel Arteta Gabriel Martinelli claims to be over his injury struggles at Arsenal and ‘ready’ for whenever Mikel Arteta needs him, with the talented teenager looking to follow in […] 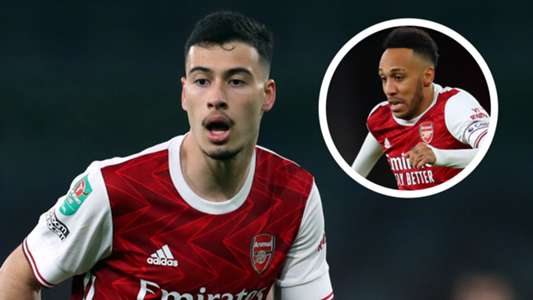