Mamelodi Sundowns co-coach Rhulani Mokwena says that new signing Rushine De Reuck was not brought in to plug the gap left by the late Motjeka Madisha.

De Reuck’s signing from was officially announced on Saturday, the same day Madisha was also officially declared deceased by Sundowns.

Signed from Maritzburg United, De Reuck arrived at Chloorkop amid a serious centre-back crisis following injuries or illness to players like Brian Onyango and Bangaly Soumahoro as well as Ricardo Nascimento and Ricardo Nascimento, who have since recovered.

But Mokwena insists that the Bafana Bafana star was not signed as a direct replacement for Madisha.

“It becomes very difficult because a lot of people are saying he is a replacement for Madisha,” said Mokwena as per Phakaaathi.

“If you look at Madisha’s profile, at the age of 23 years old he was something you don’t get in this country. He had already played in the Fifa Club World Cup, in the Caf Champions League and he won it. That extensive experience, not only in regards to just club football but also international football.

“Losing a player like that becomes really difficult replacing someone of that calibre. May his soul rest in peace, it is a huge loss for us. Not just from a technical perspective but from a human quality perspective. They did not come any better than ‘Ace’, but we have got to move on.”

De Reuck has been tipped for a new role at Downs, where he could be roped in to play as a defensive midfielder.

Coetzee has also been converted into an anchorman and is now a part-time central defender.

With Masandawana being forced to frequently change their starting line-up due to injuries and the coronavirus, as they recently admitted, Mokwena reiterated that they do not have a rotation policy at the club.

“We don’t have a standing principle in relation to squad rotation. I think at this moment in time, one of the most important things for us and even most teams is that we need a little bit more consistency with the line-ups so that the team cohesion can improve,” Mokwena said.

Mon Feb 1 , 2021
The 25-year-old is already a familiar face at DW Stadium and he will remain with the League One outfit until the end of the season Wigan Athletic have re-signed winger Viv Solomon-Otabor until the end of the 2020-21 season. The Englishman of Nigerian descent impressed in the first half of […] 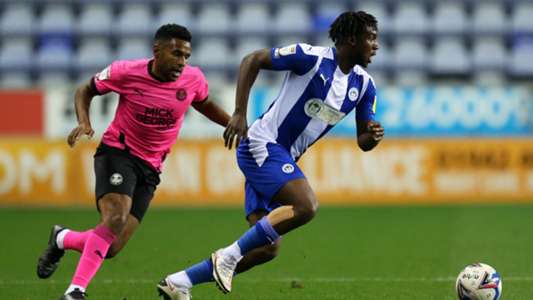