The Brazilians resume continental business, fresh from brushing aside their Gauteng rivals over the weekend

Mamelodi Sundowns goalkeeper Denis Onyango feels their 1-0 Premier Soccer League (PSL) win over Orlando Pirates was “worth it” and will benefit the side in gearing up for Tuesday’s Caf Champions League first round, second leg clash against Botswana champions Jwaneng Galaxy.

Downs started the year on a high after dismissing Pirates last Saturday in what Onyango feels was the right tonic ahead of their continental fixture.

To add to the victory over the Buccaneers, Sundowns go into Tuesday’s match carrying a 2-0 advantage secured in the away leg.

“It is nice to be back in the New Year and to have played a game on the second day was good for us, it was worth it. The game we played over the weekend was great for us and good preparation for the upcoming clash in the Caf Champions League,” Onyango told the Sundowns website.

But the Uganda captain is refusing to read much from their away victory against Galaxy, insisting that the battle is still halfway done.

The goalkeeper declares that “it’s not over” as he warns his Downs teammates against underestimating their visitors from Botswana, who he says should be respected.

“The game against Jwaneng Galaxy seems easy as we won the first leg 2-0 but it is not over, it is still half time for me and the rest of the team,” said Onyango.

“In football, you can never underestimate your opponents. We must focus on the game and be professional to win the game so that we can take the team to the next stage which is the group stages. It is almost a done deal for us but we do not disrespect the game.

“We must play the game with a lot of respect and win our home game and build up to the league game over the weekend. It is important to seal off the game and go into the group stages as you don’t want to play in the Confederations Cup.

“It is not easy to play in the Confederations Cup. We can’t be losing to a team that we managed to beat away from home. We want to get into the Champions League group quickly so that we can focus on the league as we wait for the draw of the Champions League.”

Sundowns are bidding for their second Champions League crown after clinching the 2016 title.

Mon Jan 4 , 2021
The former Citizens defender has been impressed by how the two men have linked up in Pep Guardiola’s starting XI this season Ruben Dias and John Stones are forging a “formidable” partnership according to Joleon Lescott, who says it is clear that the Manchester City duo have each other’s backs. City […] 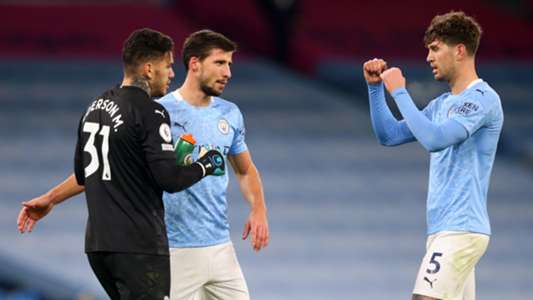