The Ugandan has played 14 of Downs’ 15 league matches and has only conceded four goals. Kennedy Mweene conceded three in his one match against AmaZulu

Mamelodi Sundowns goalkeeper Denis Onyango admitted he didn’t have to do much himself to earn a clean sheet against Chippa United on Sunday.

The Brazilians beat the Chilli Boys 2-0 at the Loftus Versfeld Stadium to open up a five-point lead at the top of the standings over SuperSport United and Swallows FC.

With the amount of chances Downs had, the scoreline could have been far higher, and while the hosts were so busy attacking, goalkeeper Denis Onyango was a virtual spectator.

“I want to thank the players for doing a great job. You can see I left the game clean [he said while showing off his clean shirt], on a muddy pitch like this,” the Ugandan international told Sundowns media.

“I think they did the job for me, I got away with a clean sheet, but the hard work that the guys put in after a long trip to Thohoyandou (a 2-1 away win over Black Leopards) two days back…we thought we would struggle a little bit.

“But the guys knew the job at hand and we just wanted to do this for our late brother [Motjeka] Madisha. I think that’s why we scored two goals, we couldn’t score a third one,” Onyango added, in reference to the late Madisha’s shirt number.

Onyango has four goalkeepers – Kennedy Mweene, Jody February, Ricardo Goss and Reyaad Pieterse – all eyeing his position. He says this is keeping him on his toes.

“All in all we are happy with three points and the clean sheet is important for us,” the 35-year-old said.

“With the quality we have in the goalkeeping department, they push me hard. So I need to represent them properly when I come to play.”

He admitted that the Chippa game was made easy for him.

Sundowns’ next match is on Wednesday – they host Stellenbosch FC in a Nedbank Cup last 32 encounter.

Mon Feb 1 , 2021
The former Blues star has been impressed with the way the England international has seamlessly adapted to his new manager’s preferred system Thomas Tuchel will be “delighted” with “intelligent” Callum Hudson-Odoi says Glenn Hoddle, who thinks the Chelsea star “suits” the wing-back role. Hudson-Odoi has started both of Chelsea’s first […] 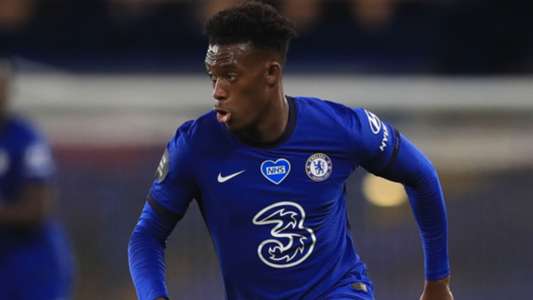