Mamelodi Sundowns will be hoping to return to winning ways when they host Golden Arrows at the Loftus Versfeld Stadium on Wednesday evening.

After the dust had settled on the weekend’s action, Sundowns found themselves just three points clear of AmaZulu and five clear of third-placed Arrows.

Abafana bes’Thende can blow the title race wide open with victory over Masandawana.

“Arrows are a good team with a clear playing philosophy. With a clear structure, in all schemes,” Downs’ co-coach Rhulani Mokwena told Sundowns media ahead of the crunch encounter.

“In possession you know how structurally they set themselves from the build-up. They use both centre-halves, and then have a six, whether is [Seth] Parusnath or [Gladwin] Shitolo to come in to create possibilities to link up their attack and to develop the play from the back.

Mokwena is especially mindful of Arrows’ potency on the counter.

“The very interesting thing is that of the last 12 goals that they have scored, 90 percent of them have come between the phase of regaining possession and attacking, they average about eight seconds to get into your final third,” he revealed.

“In transition they are extremely dangerous because this is how they kill the opponent.”

“We know the strength of the team and the quality of the team that we are facing and the work that we have to do to be able to control Golden Arrows in relation to their strengths and then infuse our playing philosophy on the match.”

Lastly, Mokwena revealed that goalkeeper Kennedy Mweene is out injured while Brian Onyango and Gaston Sirino will undergo their late assessments after picking up knocks against Chiefs.

On top scorer Peter Shalulile, who was missing from the Amakhosi game, Mokwena explained: “Peter we’ll see, if not this match, then hopefully for Sunday’s encounter (against Orlando Pirates).”

Tue Apr 27 , 2021
The Nigeria international has expressed his delight with the impressive performance of his side against the Eagles Kelechi Iheanacho has revealed he is pleased with the show of character from Leicester City after coming from behind to secure a 2-1 victory over Crystal Palace in Monday’s Premier League game. The […] 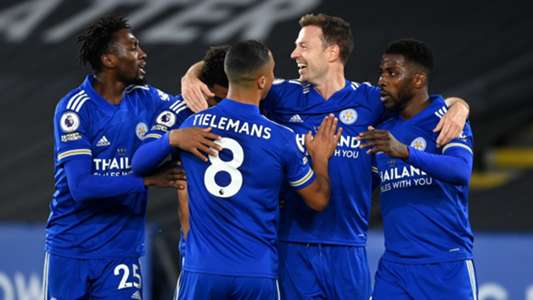