Mamelodi Sundowns co-coach Manqoba Mngqithi has revealed some details of how the coronavirus pandemic has made their lives as coaches “very difficult” by restricting their team selection.

Without mentioning the affected Sundowns players, Mngqithi says they have not managed to achieve their set targets because of key players being absent due to Covid-19.

Masandawana have had a long list of absent players for much of the season, some under unexplained circumstances.

“We hear that we are saving players for certain games or we do not want to play certain players. But that is so untrue,” Mngqithi told Marawa Sport Worldwide.

“If I were to take you from the game in Durban against Golden Arrows [on December 19, 2020] where we got a draw, we were without about 12 of our key players in that match, players missing because of some medical reasons and some small injuries.

“Fortunately, we have managed not to drop all the points, that is not to lose.

“To a certain extent yes [the coronavirus is affecting us]. It’s one of the things that has really made our lives as coaches very difficult.

“I commend the two guys I work with [Rhulani Mokwena and Steve Komphela] in the coaching department as well as Wendell Robinson because out of all these adversities we have faced this season, we have always managed to come together and comer up with a solution that makes the team not to be embarrassing but compete.

“But under normal circumstances, I remember in the past they would say if you have three players in the national team, then the match cannot be played. But now in a case where you have 11 of your key players out and the game is expected to still continue because it’s coronavirus.

“The bad part at times is that teams that are testing regularly in the league, are the teams that are also competing in the continental tournaments because we are expected to test for the flights, 72 hours before we fly and then 48 hours before the match.

“And when we have tested and we find out that player a has tested positive, out of our conscience we decide to make sure that we respect Covid-19 protocols. So this Covid-19 has hit really hard and all the teams that are competing at this stage.”

The Sundowns coach further revealed that there are no protocols that bind teams to test within a strict period of time.

He feels that inconsistencies between teams in testing have placed those who conduct regular tests in a disadvantageous position.

“There is no rule that says you should test every two weeks or every month. It is understandable because not all the teams can afford to be doing so many tests in a short space of time,” Mngqithi said.

“From time to time you go and play against a team that has not tested, you come back with some positive cases and again this is spiralling into our families, spiralling into all the people we live with at home because we are forever outside, going somewhere for a match.

“We come back and one or two players are infected, we must quarantine them and move on with our lives. It’s not very easy especially for teams that have expectations of testing now and again.

“Because if you do not test now and again, by the time you are testing to go to a Caf Champions League match, you can realise that half of your squad is out. It then becomes an even worse situation.

“So that is the situation we are facing and no one is complaining but we are moving on.”

Sundowns are yet to issue an update on player availability for Wednesday’s match away at Black Leopards as they seek to arrest a three-match winless streak, the first such a run since May 2017.

Odegaard is a magnificent coup for Arsenal, but is he ready for the Premier League? - Wright

Wed Jan 27 , 2021
A Gunners legend is hoping that the Real Madrid loanee will compliment Emile Smith Rowe and Bukayo Saka in Mikel Arteta’s attack Ian Wright has described Martin Odegaard’s arrival at Arsenal as a “magnificent coup” for the club, but has questioned whether he is ready for the intensity of the […] 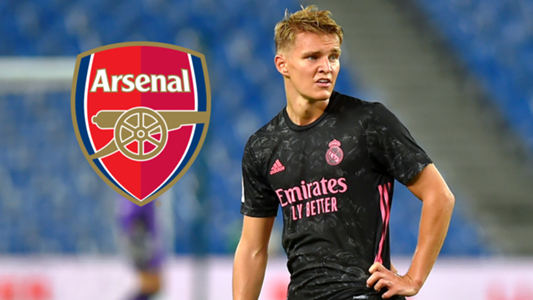